So what did KHALID KHANNOUCHI, Moroccan-born winner of the London and Chicago marathons, do to deserve Sunderland as his team? Long after we met – at a distance – I am still not completely sure. 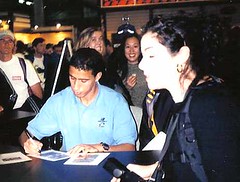 London’s Canary Wharf was busy. Office workers crowded the shopping mall at midday and an impressive queue formed as Niall Quinn signed copies of his autobiography.

This was 2002, deep enough into our last-but-one relegation season for everyone to know we were in big trouble.

Peter Reid had gone, the great Howard Wilkinson experiment had begun and, that evening, we had Man City at home. I couldn’t help thinking as I queued for Niall that, back injury or no, his place was at the Stadium of Light (and we lost 3-0).

It got to my turn and I handed him two copies of his book: one for me, to be autographed with a reference to that extraordinary championship-season game at Bradford (“from a pretend goalie” he writes), and one for my pal Pete Sixsmith of Sixer’s Sevens fame.

“Something like ‘Don’t worry, we’ll stay up’,” I suggest. Big Niall thinks for a moment, then puts: “Keep the faith.”

None of this has much to do with Khalid Khannouchi, except that Quinnie’s reluctance to endorse an upbeat message coincided with my attempts to secure an exclusive interview for Wear Down South with this most implausible of our celebrity supporters.

And looking back, how the heck could we expect a man who grew up in Morocco, lived in America and had never been inside either Roker Park or the Stadium of Light to keep his faith when so many lifelong fans seemed to be losing theirs?

But what a delight to discover that even a natural-born winner – 2002 London marathon in a world record time (under two hours and six minutes); four times Chicago marathon winner – could find it in his heart to support the Lads. If only his sporting greatness, I remember thinking and writing, could somehow rub off on the team….

Khalid, then 31 and a naturalised American, was only too pleased to share his thoughts with Wear Down South. There was one slight problem: as if to be prepared for an ascent of the Premiership to the dizzy heights of fourth bottom, he was in Albuquerque for altitude training.

So we agreed to a first for the Celebrity Supporters series: interview by email.

In it, Khalid described a little about his life, his sport, the story of his allegiance to SAFC and his recipe for survival (sadly, this was too late to save us as we were already down by the time the article appeared).

With wonderful optimism in those bleak, let’s-invite-a-World-Cup-star-for-training-and-then-let-Spurs-spirit-him-away-while-we-swan-off-to-Spain times, he recommended such ingredients as buying Olivier Dacourt and maybe David Beckham, Michael Owen and David Smith.

But Khalid’s American wife and coach, Sandra, wasn’t hanging around for Wilko to swoop for some of the biggest names in football. Even in our Premiership era, she inexplicably preferred Man Utd.

QUESTION Tell us about your family and childhood in Morocco?
ANSWER I was born in Meknes, the fourth largest city in Morocco. I came from a big family, four brothers and four sisters. My mother was a housewife while my father had a glass and mirror business. He also coached my city’s third division team. Football was always the centre of conversation in the home and that’s why I was attracted to it. My best memories are of being at practice with my father even though I was only a young boy.

Q Did you play football as a boy and, if so, what position and to what standard? Did you ever think you might make it as a footballer?
A I played football when I was a boy, I played many positions but my
favourite was in midfield. As a child I always thought I would make it as a
pro as a footballer.

Q Who were your football, and other sporting, heroes as a boy? And why?
A I was a big fan of Kenny Daglish; the Liverpool team was inspiring to watch at that time. As a runner Aouita was my hero because he was the one who introduced running to the generations in Morocco.

Q When did you first become conscious of Sunderland AFC? Was it the Steve Cram connection?
A A friend of mine called Stuart told me about the team and even gave me a shirt and flag which I keep at home, and then I found out that Steve Cram is a big supporter so that made me more interested.

Q What form has your interest taken?
A I watch a Fox Sport weekly programme showing the English Premier League. I haven’t been able to attend a Sunderland game but Steve Cram has promised me that when I’m around in England he will take me to a match.

Q Do you go to any lengths to see games on TV or to keep in touch with events concerning the team? Do you worry about results/league positions? Does Sandra share your interest?
A Every week I go on eurosport.com to check the results. I do worry about the results and league position. Sandra is not so interested in football but she sometimes likes to watch it and likes to follow Manchester United.

Q Which Sunderland players do you rate, and which players at other clubs would you love to see play in red and white stripes?
A I like to watch Kevin Phillips. He is very good. I would like to see Oliver Dacourt in the midfield and many other good players. I like Beckham, Owen, Smith.

Q After the Chicago marathon, you told interviewers you were disappointed at the dismissal of Peter Reid. Why?
A I thought he was a very good manager, with great football knowledge. I was disappointed for him that the team did not show such good results but I still understand the pressure of getting performances and results.

Q What do you think is the main cause of our present predicament? How would you solve it?
A The quality of the English Premier League means that you have to be on top of your game. But also I think that we have to get more young players who have a promising future and want to play for the team.

Q Have you already planned visits to any games this season?
A As I said before, Steve Cram said to me that next time I’m in the UK we can try and arrange to see a game and I am excited about that. I plan to run the London Marathon in April and I hope that I can be in good shape and hopefully go to a game after that.

Q What do other sportsmen and women – especially those who either support much more successful clubs, or don’t like football – say to you when they hear of your interest?
A Now that people know that I support Sunderland, they come to me and make jokes about our current performances. That’s why I hope that the club can get better results in the future.

Q Are you confident that 2003 will be as successful a year for you as 2002 has been?
A I’m working on that but nothing is guaranteed because our sport is so hard and the demand on your body is great and you can easily get injured. But if I can stay healthy and keep the level of hard work, then I think I can have another good season.

Q Are there ambitions, sporting and personal, that you still wish to fulfill.
A I hope that I can represent the United States in the next Olympics and try my best to perform to my ultimate potential. Also I hope to be a successful businessman in the future and help my community.

Q Do you regard yourself as a Sunderland supporter for life, or is it possible the interest might wane?
A I would say that so long as I am interested in football, I would follow Sunderland.

Q Do you any personal contacts or friendships among the players and/or staff of the club?
A No, but I would hope that I could meet people from the club in the future.

2 thoughts on “Loneliness of the long-distance fan”