Looking back at the earlier posting Burst Bubble?, maybe a slightly harsh headline after one poorish result at home, I decided to add an answer to my own question. 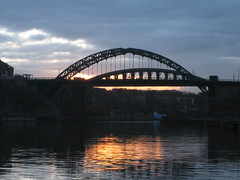 Get across that bridge! Picture: Bubble pop

What, I originally asked, would it take to get the home fires burning again? The attendance of under 27,000 for that midweek visit of Palace had disappointed me enough to raise negative thoughts

In my after-thought, added today, I mention that a stonking away win would do no harm. And that, following a respectable 2-0 dismissal of Coventry a few days after the Palace draw, is what we got.

Two more back to back victories – it won’t, I imagine, produce a 40,000 gate for the visit of Southend on Saturday unless there are more incentives for young supporters.

But with any luck, and especially after Plymouth (and what Pete Sixsmith rightly identified as a massive result in his Sixer’s Sevens verdict), something in the region of 35,000 – and noisy – would be highly encouraging. Just heard the gate is 33,500+ and sounds as noisy as you’d expect at 3..sorry 4-0.

If we can see off Southend, and despite their recent improvement that is the logical outcome, what a scene-setter for the visit of the Championship leaders. Derby County, a week later.

Can we give a decent account of ourselves at Birmingham between those two home games? Can Stokes build quickly on the huge lift-off he gave his Sunderland career with his cracking goal at Home Park?

All games matter, just as managers like to say.

But the coming three will obviously have an unusually important bearing on whether we can do the improbable – the feeling within the club is still that it’s a “big ask” – and force ourselves into an automatic promotion spot.

Sadly, Toulon airport is a shade too far away from the Stadium of Light for me to be able to match the commitment I am urging from other fans, though I will certainly be back at games between now and the end of the season, however the Premiership push develops.

** Whither Eric Roy, Joan Dawson asks. I will scout around for news, though my last knowledge of his whereabouts was when he popped up in French TV studios to summarise the Premiership game at Boro last season.

I liked Eric, too, and loved the chant. Wasn’t it ooh aah, say (c’est?) ooh aah, c’est ooh aah Eric Roy.. y’naah? Perhaps someone can improve on my version. But he was never the fastest of players and is now nudging 40.

Nice, which is his birthplace and was also one of his clubs after he left Sunderland, now has two other SAFC connections – Laslandes’s bright start making up for the injury problems that have sidelined another of their strikers: a certain David Bellion, who spoke in a French interview recently about the vivid memories he retains of that great – if rare – goal he scored for us at home to Aston Villa.