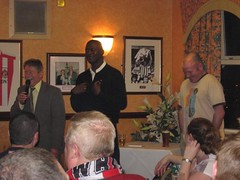 Gary Bennett and, to his right,
another SAFC hero, Bobby Kerr
Picture:KariSue

Let us hope that by about twenty past three this coming Saturday, as the referee blows the final whistle after the early fixture at Barnsley, those of us following events on radio will be treated to a happy-sounding Gary Bennett.

Bennett was always my kind of player when he wore red and white: whole-hearted, fearless and able to show real skill and vision as well as a capacity for solid hard work.

There was a defeat at Liverpool when we deserved a lot better, and Brian Glanville (I think it was Glanville) spoke in his match report for the Sunday Times of Bennett’s surging, “sinewy” runs upfield.

And in his role as summariser to Nick Barnes (pictured below) or Simon Pryde for Radio Newc**tle’s matchday commentary – indispensable for the exiled supporter – he invariably seems as on the ball as he was that day at Anfield.

He saw the Birmingham equaliser coming, banged on – rightly – about the need for that vital second goal at the Hawthorns and is quick to identify who is playing a blinder and who needs to be replaced.

Sunderland fans were entitled to savour the joy of Saturday’s victory – and to laugh off Tony Mowbray’s absurd, embittered post-match comments. But the win leaves us plenty to do if we are to snatch an automatic promotion place.

On one page of yesterday’s Sunday Times, the headline read Sunderland Drive On.

But on the facing page of the edition I bought – for an outrageous five euros – on the French/Italian border at Menton , an article by Joe Lovejoy brought us back to earth a little.

Applauding the policy of both Derby County and Birmingham City in taking on loan Arsenal players “they have no hope of keeping”, Lovejoy said it seemed “increasingly likely” that both clubs would be promoted.

Although he didn’t say as much, he would have to accept that most readers would assume he was tipping Derby and Birmingham for the top two positions.

This, I thought at first, was sloppy journalism. The phrase “increasingly likely” was completely at odds with the run we’ve just had, with victories over two of the teams above us and a draw away at the third.

But a glance at the table shows that Lovejoy’s choices do indeed remain the favourites, in terms of points won and games played. We have to keep winning, of course, but one of them also has to falter.

As I have noted, the feeling within SAFC three weeks or so ago was that automatic promotion seemed a “big ask”. We have to be realistic and admit that while the great progress made since then changes that, the change remains – for the moment – not quite enough.

But look at the glorious opportunity thrown up by this weekend’s fixtures, he said, writing before Derby County made everything that follows academic by winning at Norwich last night.

Derby at Birmingham of Friday, us at Barnsley on Saturday and West Brom at Wolves on Sunday.

There is no combination of results that would take us top. And Derby can (did) spoil my calculations simply by avoiding defeat at Norwich and then losing against Birmingham.

Had Norwich won, victory at Barnsley would have pushed us up to second on Saturday afternoon whatever had happened at St Andrew’s the night before – and would have kept us there next day provided Wolves avoid defeat at home to WBA.

In the end there were too many ifs, with the game at Carrow Road proving the undoing of my mathematical doodling.

It shows once more how much stands between us and the top two places. It is not even so much a case of the two points apiece dropped against Palace at home and Birmingham away; the real damage has been done by 11 defeats, a tally that amounts to a formidable obstacle to automatic promotion.

We can still take a lot of comfort from how much progress has been made in the past few months – and from Ian Todd’s argument elsewhere that assuming we at least make theb play-offs, we should have nothing to fear from any combination of rivals for the third place.

For now. let us just hope that the run continues and that Gary Bennett find himself summarising another winning performance come Saturday, giving Niall Quinn cause to sound even more upbeat next time he speaks to the Guardian.

* PS. I read that Julio, inevitably, was booed at Newcastle on Saturday, and that he made light of it.
But what of Kevin Phillips at the Hawthorns? I hope that any jeers from our end were drowned out by cheers or applause. However unpopular a view this is, his decision to join WBA, instead of returning to Sunderland, was totally logical on family grounds and would even have been understandable in footballing terms. The man gave us so much that he should always be treated with respect.

1 thought on “A story of ifs: how this weekend might have been ours*”