Sunderland folklore has it that Roy Greenwood, who was nearly a very good left winger for us, screwed up a chance to join Arsenal because, if I remember it correctly, he missed the train to London for his medical. 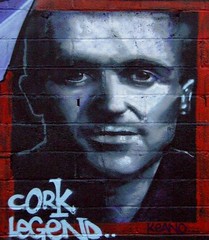 No messing with me
Picture: Kieran’sPhotos.

Leaving aside the issue of why he would want to move to a smaller club in the first place, I should say that the story may not be true. I have come across his sister during my career (she is also a journalist), and she insists that it is not.

No doubt seems to exist in the cases of Anthony Stokes, Marlon Fulop and Tobias Hysen, all left behind in the North East on Friday when they failed to turn up in time for the team coach for Barnsley*.

Roy Keane – don’t you just warm to everything he has done since coming to the SoL? – said he’d warned players repeatedly about timekeeping and had decided “a line had to be drawn”.

So three key members of our squad played no part in the excellent 2-0 victory at Oakwell.

By taking a firm line with the absentees, Keane was doing nothing that had not happened to him in his own career (disciplined for arriving late for a coach while on international duty with the Republic of Ireland in America).

He was even more famously punished in 2002, sent home from the World Cup finals in Japan after a bitter fall-out with the manager, Mick McCarthy.

Keane probably had the backing of many more Irishmen than McCarthy on that occasion.

But there can be only one boss in such circumstances and it can never be a player, however superb that player happens to be. McCarthy was therefore right, and Keane the Manager may privately now acknowledge as much as far as I know.

And on Friday, he was making it clear that he, in turn, had to be seen as the boss when managing. The trio of miscreants will learn from their minor disgrace, I hope, not least because they know that their colleagues went on, without them, to show – as Sixer points out in his seven-word verdict – what strength in depth the squad now has.

About the performance, but also clearly about the disciplinary matter, Keane said: “Sunderland over the years have been seen maybe as a soft touch, by the opposition and by the people who work there, but those days are over, let me tell you.”

Made me feel even better about the victory.

**Sharp-eyed readers will see that as well as adding the goals from Barnsley (here, as above, the phrase excellent 2-0 victory is the link), I have corrected Roy Greenwood’s position. Memory was playing tricks……

1 thought on “Keane on laying down the law”