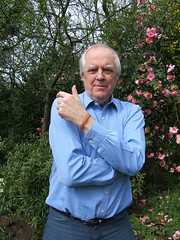 Top writer, lyricist and broadcaster that he is, Sir Tim Rice has won plenty of plaudits and awards.For his real career break, however, he was chosen as the very first subject in the series of Celebrity Supporter interviews for 5573, the magazine of the London branch of the SAFC supporters’ association (later renamed Wear Down South).

As I pointed out at the time, near the end of 2000, Tim had an important quality in common with others who follow Sunderland: he can hardly be called a glory seeker.

The interview with the man who, as the composing partner of Andrew Lloyd Webber, created Evita, took place in exciting times – the second of our seventh top Premiership seasons.

But Tim* is no fair weather or bandwagon-jumping fan; he has been fond of Sunderland since boyhood.

* With 5573‘s unrivalled access to the stars, first name terms came naturally….I am renewing contact with Tim and will update this posting if he gets back with more news of his life as a supporter, though Wikipedia reports that he was awarded a honorary doctorate by Sunderland Uni at a ceremony at the SoL in Nov 2006 and was named a Disney Legend in 2002.

In his Who’s Who entry, Sir Tim Rice lists his interests as cricket, the history of popular music and, intriguingly, chickens.

Perhaps he ran out of room while filling out his form. For Tim has a fourth interest shared by all readers of 5573. He is an avid supporter of Sunderland AFC.

No member of the Rice family is known to have worked in the Wearside collieries or shipyards, or grown up in the towns and villages of County Durham that traditionally make up the club’s broader catchment area.

But in an early display of his individualistic streak, nine-year-old Timothy made a choice that was to turn into a lifelong obsession.

At his Harpenden prep school – and yes, he cheerfully accepts that this, too, sets him apart from other Sunderland fans – the majority of his pals decided they would support Wolves, then First (as in Premier) Division champions, a London side or even one of the nearby clubs, Luton or Watford.

“I was quite sure I wanted my team to be one no one else had got,” Tim told me. “I chose Sunderland purely because I liked the name. I had no idea where it actually was. Only afterwards did I find out I’d chosen the one that was about the furthest away of any.”

It was four years before he was taken by his father to see the Lads play. A match at Stamford Bridge was followed by visits to other away games in London.

While many of us would love to see the impact on Man Utd’s universal support of a few seasons in the doldrums – and I mean rather more than finishing outside the top two or three once in a blue moon – Tim’s attachment to Sunderland survived the calamitous first relegation in the club’s history in 1958.

Not Julio, but another
Argentinian hit
Picture: another_penny_lane

His debut at Roker Park had to wait until the heady days of 1973, when he saw the Man City and Luton games on the way to FA Cup glory. He also managed to get to the Hillsborough semi-final against Arsenal, and to the magical final against Leeds that gave 5573 (May 5, 1973) its name.

Over the years, he has seen on average just one or two games a season. Recent highs – and this meant “recent” to 2000! – have included the electrifying 2-0 win over Sheffield Utd that took us to the 1998 promotion play-off final.

He also found himself in Tony Blair’s company for the 2-2 draw at home to Man Utd at Christmas 1999.

Stand by for a 5573 scoop (one picked up at the time by the Daily Telegraph and Northern Echo): our Prime Minister’s desire to be all things to all men reached its logical conclusion that night. He announced to Tim that he was a Sunderland devotee.

This may come as a surprise to those Mags who so desperately wanted to believe Blair when he insisted that he used to sit behind the goal at St James’ Park (forgetting there were no seats there at the time), or said how he loved watching Jackie Milburn (by then retired).

It certainly surprised Tim Rice. “I just thought it was bonkers,” he said.

At the time of speaking to 5573 , Tim was looking forward to another trip to the Stadium of light, with David Essex, a Hammers fan, for a 5th round cup tie (his famous friend was to end up happier after West Ham beat us).

He was (when interviewed) as delighted as anyone to see the club higher than at any time in his 47 years as a supporter. But he says he would have been “quite genuinely bored out of my skull” supporting Man Utd or even Liverpool, teams that have come to expect to win more or less every game.

“I remember being very upset about the relegation in 1958, and even worse when we went down to the third for a season. But it’s probably good for the soul. I just cannot understand how people can care that much about Man Utd unless they were brought up in Manchester.”

With a career that then included three shows on Broadway, and commitments in various parts of the world, Tim spends a lot of time out of the country. He keeps in touch via the internet, looking up the club site or Radio 5 Live.

He has seen live televised football when in America, but never a game featuring Sunderland; “for some reason it always seems to be Ipswich”.

He wants to know, wherever he is, how the Lads have done. but doesn’t fret about getting the result as soon as the final whistle has sounded thousands of miles away. “I am quite happy to wait and savour the moment,” he said.

Much as Tim loves cricket, his involvement with the MCC and the Lord’s Taverners made him feel like a part of the sport’s establishment, whereas with football, he’s a fan.

Not every fan, of course, can buy 10,000 shares in the club he supports (memo to self, March, 2007: must remember to ask if he sold them back when big Niall came asking).

But there is something to be admired in anyone who sticks as faithfully to a club through some fairly miserable times.

In a slightly rushed conversation – though Tim did show an impressive sense of priorities, keeping someone waiting until we had finished – I never did get round to asking him about the chickens.

Especially now that I am a freelance, I wonder if he’d consider an interview for Poultry World.