Looking up the Premiership results yesterday, my main concern was to know which teams we would be playing next season and which we would not. 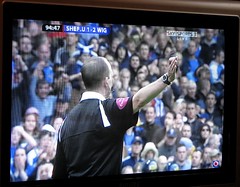 The excitement of our own storming surge to the Championship title has not worn off. Nor has the thought that this time, after all those past disappointments, we actually mean business.

There is enough of the Sunderland supporter in me to take nothing for granted. But these guys – Drumaville, Niall Quinn. John Hays, Roy Keane – do seem to know what they’re doing, in a way you simply never felt about past managements.

So logically, we must approach the Premiership in the belief that there are six points waiting to be taken from each of the other 19 teams.

But would I be surer of those points, or some points, from West Ham than from Wigan or Sheff Utd? Previously, I’d have said no, now I am not so certain.

I am certain of three other things, though. If I were a Sheff Utd fan, I would be:

1) Extremely cross that my team had somehow snatched disaster from the jaws of safety. Of all the teams scrambling for points at the back end of the season, they seemed best placed to avoid the drop – and had a promising run-in (Villa away, only to produce a wretched performance and cave in) and Wigan at home (unable even to manage a draw in such a vital against 10 men)

2) Even more cross with Sir Alex Ferguson for fielding a weakened side in a match of immense importance to the Game of Football, though not to a club already crowned as champions

3) Pinning hopes on Messrs Sue, Grabbitt and Runne, esteemed firm of lawyers, and their forthcoming legal battle to force a points deduction, and therefore relegation after all, on West Ham for improprieties that – inevitably – involve Carlos Tevez, scorer of yesterday’s winner at Old Trafford.

Nothing special against West Ham. If one of the few individuals in the world that I despise happens to support them, so do one or two people I like.

But when draconian punishments are handed out to lowly clubs for relatively trivial breaches of procedure and rules, it is positively obscene to see a Premiership club getting away with a slapped wrist.

Next Post
All the president’s men: in Red and White