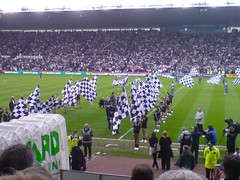 Derby want out, too
Picture: Phillip.

Supporters of Watford, Charlton and Sheffield United may not yet be in the mood for small consolations. But whether or not it makes them feel any better, one is being offered from across the Irish Sea.

Shane Breslin’s football blog at www.eleven-a-side.com has produced a decent argument for the proposition that the Nationwide Championship is better, that is to say more attractive, passionate and exciting, than the Premiership.

He cites six key reasons in support of his claim: five of them being the theatre of the playoffs, the unpredictability of success and failure, the abundance of goals, a relative absence of simulation (also known as cheating) and also the relative absence – in the Premiership – of fair play.

The sixth reason, of course, is Sunderland.

“Have more column inches been devoted to any other story this year?” Shane asks, drawing a sharp contrast between the respective levels of hope generated by Mick McCarthy’s promotion season and Roy Keane’s.

“Indeed, it is difficult to recall greater goodwill towards any club in the modern era, from this side of the Irish Sea in particular. From Boylesports to Aer Arann, from Drumaville and Niall Quinn to Keane’s apparent mastery of the management game, it is an Irish feel-good yarn clad in red-and-white stripes.”

It’s good knockabout stuff. And how many of us can readily admit to enjoying our second-tier seasons a lot more than all but two of those we have experienced in the top flight in living memory?

We see more wins, more goals at the right end and we can usually expect to be at or near the top of the league.

But the whole purpose of cheering the Lads on to victory in the Championship is that success there means a return to the Premiership the season after. That has always been the case, long before the money, commitment and flair of the Celtic injection gave us cause for such raised expectations.

And once we’re there, we want to stay there, and compete on equal terms with the best in the land – without ever, I fervently hope, losing sight of the fact that Sunderland is a club, a great and proud club, and not just a brand.

Have your say, at Shane’s site or here, or both.

But the airing of the topic gives me an excuse to recall this anecdote from Bill Taylor, a Sunderland fan living in Toronto (the Canadian one, not the village near his own home town of Bishop Auckland).

“Dunno if you’ll remember the name of Gordon Bradley (pictured) , who signed for Sunderland as a 16-year-old back in the ’50s,” says Bill, who writes for the Toronto Star.

“A knee injury put him out of the game for two years and then after that he played for Bradford and Carlisle before emigrating.

“I got to know him quite well when I worked in New York in the ’70s and he was managing the New York Cosmos (with Pele on his books!).

“He always said that he’d rather watch a good second division game than a bad first division one, echoing sentiments expressed to me (while I’m name-dropping) by Michael Parkinson when I interviewed him once for the Northern Echo.”

2 thoughts on “The Championship’s champion”