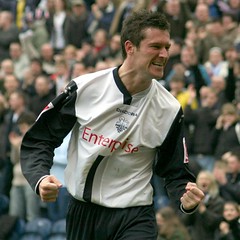 So David Nugent will not be playing in the new Boylesports-sponsored red and white stripes of Sunderland in the coming season, and our post-promotion list of acquisitions stands at two*: the encouraging purchases of Greg Halford from Reading and Russell Anderson from Aberdeen.

Very little of what I have seen or read about Mr Nugent inspired me to think that here was a top class striker who, despite showing a lack of obvious enthusiasm for a move to the Stadium of Light, would quickly win a place in the hearts of our fans.

Niall Quinn, I am sure, was right to express some understanding of the reasons for his prevarication. Roy Keane was even more right to become exasperated enough to conclude that he had no further interest in the player.

The Sportingo fans’ site was probably being a little harsh on Nugent in suggesting that he has been less than gentlemanly in his dealings with SAFC.

But from Sportingo’s assessment of him as a “rather limited player” to Terry McLoughlin’s view, at the Blackcats loop that he is “an unproven, average-to-decent, Coca Cola striker”, there seems little cause to be weeping into our beer (or vin rouge).

It is also far too early to become despondent about our slow progress in the business of strengthening the squad.

While we were all still reflecting on a great promotion season, Keane, Quinn and the chief executive Peter Walker were busy hammering out a wish list of nine targets. Not all of these even figure in the mile-long “rumour mill” list at the official club site and there is every reason to believe we will still land some of them.

What we are up against, above and beyond the desire of players to hold out for what they believe to be the most attractive places to play their football (and live their lives), is the massive wage inflation that is rampant throughout the Premiership.

It is not unknown for players that you and I might regard as ordinary to above average, in Premiership terms, to think they can still expect huge pay rises giving them, say, half as much again as Keane’s reported £2 million a year salary.

We have to compete with market rates but we cannot afford a repeat of past follies, saddling the club with crippling payroll obligations for seasons to come.

And we must not risk demoralising good men among the promotion squad who may be in line for better terms but are not suddenly going to find themselves earning £40,000 or £60,000 a week.

Our Nugent hopes may well have been dashed for reasons unconnected to the player’s own valuation of himself, but you can take it from me that unrealistic pay demands squeezed us out of at least one other possible deal.

Roy Keane, I am sure, knows we need to recruit two, three or more players of genuine and proven Premiership class to raise the level of our play in the way that Stefan Schwarz and, for an invaluable if short period, Steve Bould, did after the 1999 promotion.

And because we did not win the Championship with anything approaching the Quinn/Phillips strike force, we are in serious need of goalscoring punch. Would David Nugent, or even Diego Forlan, with whom we were also linked, really have provided that vital element?

Too many of the people mentioned unofficially as SAFC targets in transfer speculation have been from outside the top flight.

But remember that the speculation is just that, however informed it might sometimes turn out to have been. July has barely begun, the club is working flat out to bring in the players we need and I see no immediate cause for concern.

Niall Quinn, as I have just spotted, offers some support for my assessment in a comment made to the Northern Echo. “The market is very, very hot,” he said. “The new money in there has certainly made the Premiership a tough place to do business, but that’s what we’re here for and we’ll give it our best shot.”

* Apologies to Russell, and the legion of admirers he leaves at Aberdeen, for initially overlooking his purchase