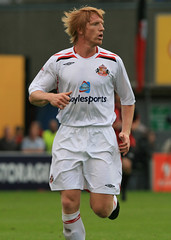 About 20 minutes to go, and on comes Michael Chopra.

Read Sixer’s Sevens. Pete (Sixsmith) didn’t just pluck his seven-word verdict out of nowhere in the euphoria of a victory that put us briefly top of the Premiership.

At that moment when Chopra, Mag turned honorary Mackem, took the field, Pete said: “Just let him grab the winner in the 89th minute and all that bile will be forgotten.”

Okay. It took Chops – as Keano calls him – two or three minutes longer, until the dying seconds of time added on. And then he buried the ball as sweetly as you’d want a striker to do, after superb work – on the right, would you believe – by Ross Wallace, who’d played all game on his natural left.

Salut! will have plenty more to say about the opening game and lots of pictures to post.

It was fabulous way to start the season, Chopra’s goal a marvellous way to win the game. And the 44,000 fans played their full part, creating a smashing atmosphere.

But this is written on the hoof, and the longer report must await my return to France early next week.

One last point for now: Nosworthy did have a sound game in the heart of our defence. He wasn’t, for me unlike for Sky viewers, man of the match.

That, and by some distance, was Paul McShane. Won everything there was to be won, to the extent that as soon as you saw the high Spurs ball going anywhere near his shock of red hair, you stopped worrying.