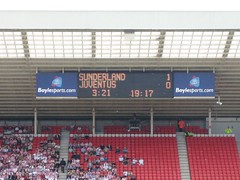 That was the kind of result we could live with, 1-1 against Juventus in our final pre-season friendly before the opening match, Spurs at home on Saturday.

All the more creditable because we held a lead until the very closing stages and even then had chances to win the game. Fortunately, one of the two photos by “Dkodigital” – he’s a supporter based in Ferryhill; my thanks to him for permission to reproduce his work – captured the scoreboard at just the right time.

Of the reactions I have seen, Roy Keane’s is perhaps the most important, and he managed to combine cautious optimism with realism, while praising the players for making such a good shot of it. 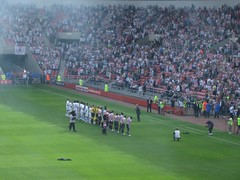 But with nearly 26,000 present at the Stadium of Light and many more watching on TV, the views of fans are also worth recording, and I offer two……

Over at the Blackcats forum, Neil Chandler had this to say:

I am somewhat more confident after watching this than
the 3 irish games. From the performances so far, McShane is going to be a
big hit with the crowd. Richardson has skill and pace. And Etuhu is just
fab. He’s fast and big, puts himself about and can tackle and pass too.

A good game which they deserved to win. A week to find a left back and some creativity in midfield.

I think by “they” he means us (NB: read the comments below to see whether this assumption was correct…..).

Pete implies that the need to strengthen the squad in readiness for the Premiership is still an issue. But he makes no reference to a striker.

Speculation about Mido has gone quiet, though I am sure Keano would dearly love to be able to parade a big name or two in the days that remain. Most fans are probably quite happy that David Bellion, despite earlier rumours, is not among his targets.

But for what it is worth, I pass on the news that after grabbing a couple of goals in the warm-up games, Bellion scored the winner for his new club Bordeaux when the French top flight began the new season last night.

Lilian Laslandes was also in action again, still at Nice, who lost their first game, away at Caen, 1-0. I checked later on whether he had kept up his routine of being described as playing a “thankless role” just ahead of the defence.

But no, the French report card was a little more harsh this time: my not-quite-literal translation of the Nice-Matin player-by-player assessment is that he huffed and puffed a great deal, trying everything he could with feet, head and body, but achieved nothing.

Next Post
On tour with SAFC: the West’s awake