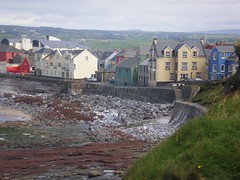 From Cork to Galway and an easy drive via Limerick and Ennis, we stopped in the town of Gort which has a population of 6,000 of which 1,500 are Brazilians attracted by the meat packing factories in this area.

We looked for Emerson Thome assuming that he would be head honcho but no sign of him.

I last visited Galway 20 years ago when it was just a sleepy university city with a Northern League standard football ground.

Now it is the Celtic Tiger personified, with new industrial estates, shopping centres and houses that look as if they have been transplanted from the suburbs of Northern Virginia or Massachussetts.

In addition it was packed with people flocking from all over the Republic to sample the Galway Races. As keen sportsmen we went along and enjoyed another very Irish sporting occassion.

Like the hurling, it was a very egalitarian event with the toffs rubbing shoulders with the riff-raff. As fully paid up members of the riff-raff brigade we made several bookies richer in the course of the evening as we did a Robin Hood in reverse. And don’t take any notice of Grant Leadbitter the next time he gives you a tip in Boylesports – the one he gave us ran like a cross between Steptoe’s Hercules and the long dead Shergar (Pete Horan did claim to have spotted him in a field but I remain to be convinced).

On Wednesday we had hoped to take a trip to Craggy Island to look for Ted Dougall and Jack’s Parochial House and the shop where Joseph and Mary got along with each other as well as Graham Souness and Craig Bellamy did.

But the weather was poor and we opted for a visit to Lisdoonvarna, home of the Match Making Fair every September and also a rousing song by Christy Moore.

A modest little town but at least the weather had cleared and we were able to enjoy the stunning West Coast scenery at the Cliffs of Moher and drive around The Burren. This was described as a lifeless slab of stone where nothing worthwhile grows, and for some reason it made me think of The Riverside Stadium at 3.00p.m. on a Saturday.

We located two seats only to find ourselves being squeezed, punched and nipped by a little bundle of fun called Matthew. He was 14, loved Roy Keane and football and adored playing hurling.

His mum explained that his Down’s Syndrome never stopped him from doing anything and that he was just as active as her other six children. He had been at the training session earlier in the day and had shaken hands with RK. We told him to ignore any racing tips from GL.

The game`was the sparkiest on of the three. Galway made it clear that there would be multiple substitutions at half time as they wanted their players fit for a crucial relegation battle with Waterford on Friday.

Whether it was a sensible move by their skipper to raise a fist at Kieran Richardson is debatable – had it been a league game he would have gone. Richardson showed his class with the second goal as Chopra had done with the first.

As`Galway tired, Connolly and John were able to put a more convincing scoreline on the board. We retired to a heaving Galway to see the unlucky punters drown their sorrows and the lucky ones and the bookmakers celebrate a prosperous afternoon.

It was a good trip. Ireland is a very welcoming country away from Dublin and although it is expensive, it is a great place to holiday.

Highlights were Croke Park, the pleasing standard of football in the League of Ireland and the massive impact that SAFC have had on the Irish scene. Expect more Irish visitors to the North East next year.

Disappointments were one or two players who seemed to be not quite there (Stokes, Halford, Edwards), the unpleasant hustle and bustle of Dublin and Grant Leadbitters inability to find us the drean winner that would have paid for the trip.

Pleased to be home, but keen to go back.