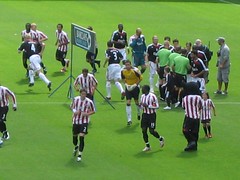 Do we know which way we’re going?
Picture:dkodigital

Roy Keane has just over three days to persuade us that he has won the transfers debate.

His supposed targets – they include the Stoke City defender Danny Higginbotham and Southampton’s striker Kenwyne Jones – do not amount to the “names to excite the fans” billing Keano himself came up with when worries first surfaced about our activity in the market.

Both may, if they come, prove excellent assets. That isn’t the point.

What we have all more or less been saying From Word Go is that we need established Premiership level quality. And on the evidence to date, we may still need it in three out of four areas: back four, midfield, attack.

Leaving aside Higginbotham’s experience in the lower reaches of the division, Andy Cole is the only answer offered to us by this late stage. And he’s not even properly fit.

As I write, we are 3-0 down at Luton, and Greg Halford has added to his unimpressive start as a SAFC player by managing to get himself sent off. I couldn’t care less about the Carling Cup, but I care very much indeed about a performance as desperate as this just a few days ahead of Man Utd away.

Would it be too unkind to suggest that the squad Keano has assembled, subject to the late additions he promises, is one we cannot seriously expect to compete above bottom six?

I desperately want to be proved wrong, but I fear the worst for now. It is not for the want of trying that Keano is not already fielding a side dotted with class and the ability to produce the unexpected.

Everyone supposed that our manager’s name and reputation would be enough to guarantee the commitment of top players. David Nugent is not – at least, he is not yet – a top player yet even he kept us guessing before going to Pompey. Defoe said: “Thanks, but no thanks.” Someone else’s missus her foot down and her old man went to Everton. Mido ended up at Boro, for Pete’s sake.

Keano is probably not to blame for failing to sell the charms of Sunderland and, with Mido’s exception, life in the North East. It has always, to some extent, been thus, leaving us with scraps: Scottish players anxious to move south, non Premiership-level talent hoping to move up a notch and players on their way down from whatever heights.

But Reidy managed it. Stefan Schwarz and Steve Bould were surely no more difficult to convince than Defoe, Leighton Baines and Chris Baird.

How many of us are hoping to do more than escape a hiding at Old Trafford, even if four points from a tough opening five games probably seemed realistic back in close season? If it’s 3-0 or worse, the lack of serious quality will have played a part; if it’s 1-0 or, let’s fantasise, better still, we’ll all happily eat our words, show bare backsides in the Bridges centre and acclaim Keano once more (well, I’ll do one of those things).

I will end, for now, by passing on the views of fellow fans, starting with one that is cautiously upbeat, one that is bleaker, from the Blackcats loop:

It’s amazing how rapidly a Blackcat’s confidence and optimism
evaporates. I’ve only seen two games this season so far, Liverpool
and Spurs, and I have to say I’m quite encouraged by what I’ve seen.
They’re a strong, hard working side that never gives up and can even pass
it around a bit. I think the only trouble is that once they’ve won the
ball (again) and passed it around a little bit, they haven’t got a clue
what to do next, so they hoof it up the pitch and/or lose possession. We
lack creativity in midfield, an out and out playmaker, who can deliver
that defence splitting pass or clever ball to the advancing winger. That
would be my priority, I reckon the rest would fall into place. I’m not
massively worried yet, ask me again at the end of next month.

Not so good: Mick Goulding

We need Premeriship quality and buying Championship players isn’t going to give you that as quickly as it’s required to stay up. I accept that Keane probably hasn’t been able to sign the players that he really wanted (because they won’t come), but that’s no comfort to us, and we’ve ended up with second-choices who mostly aren’t ready for what we have to do. We’re filling the team with non-Premier players, which is precisely what Mick McCarthy did – albeit his were cheaper and worse. So we’re currently a typical promoted Sunderland team – which will scrap and battle and win the odd game, but will ultimately struggle. The difference now is that we won’t have a 15 point season, but I’m not convinced.we’ll get beyond 40 with Saturday’s team. I was disappointed on Saturday, and while I agree we were never going to win, the big minus was our complete absence of any quality. To succeed we need to be outstanding in a couple of areas of the pitch. We’re not outstanding in any outfield position at all – probably only Gordon is. We were mediocre everywhere on Saturday. No decent or dangerous balls, no good crosses, no good shots, nothing in central midfield, no support or service for the strikers, and quite a few mistakes at the back…………We desperately need a quality midfielder and a Premisership quality striker, or else we will continue to struggle. Lose on Saturday and we’re probably in the bottom three – which we all know is hard to get out of once you’re in. Let’s hope the signings come and they’re bigger than expected.

But since “Roughy” was taken to task here after raising doubts about Kate Adie’s credentials as a real fan, and has had the bottle to write in, he gets the last word. And it’s a long way from Mick’s pessimism:

I’m not too concerned at the minute… I’ve just learned to trust Keano. I think expectations were too high. Christ! some people were even talking about Europe!

1 thought on “Roy Keane and the great transfers debate (4)”