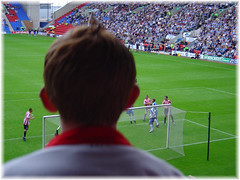 How did you spend the day after Wigan?

Since I have always regarded Sunderland as the Durham county football team, I hope as many as possible of you were following Durham County Cricket Club’s excellent victory in the Friends Provident Trophy final at Lord’s.

Some SAFC nuts, Pete Sixsmith included (hence my stand-in role on Sixer’s Sevens) were glad to have been there yesterday too, instead of at Wigan. And who can blame them?

I could not follow the cricket, but I did devote a few minutes to filling in my renewal form for the London and South Eastern branch of the SAFC Supporters’ Association. It was a necessary act of faith after the dismal events of the day before.

Passion for your club does not depend on results, nice as it is when results go well. The passion is unconditional.

Our new Irish – and any other – fans have to realise that while supporting the Lads is never boring, it also brings no certainties of success. Plenty of us have experienced those play-off blues, relegation sickeners, thwarted promotion bids and the rest.

Get a few Wigans under your belts and see if your hearts are still in it.

In our first Seventh Top season in the Premiership under Peter Reid, we were hammered at Chelsea, Man Utd and – to the tune of 5-0 – Everton.

Without the longest of memories, you can also pinpoint Wimbledon away (last game 1996/97 season), Notts County away (last game for 1992/93, fighting not nearly hard enough against, but undeservedly avoiding, relegation to the third flight just a year after we were in a Cup Final) and the 1987 Gillingham relegation play-offs.

These things happen when you follow Sunderland. It’s as well that the fresh faces around the stadium had yesterday’s early reminder of that essential truth.

* Apologies to dkodigital for expanding his caption from his original “sit down lad, I can’t see”…….couldn’t resist it