Steve Bennett, it is fair to assume, is not a name to be found on Roy Keane’s late Christmas card list. But, says Pete Sixsmith, do not run away with the idea that we actually deserved to win 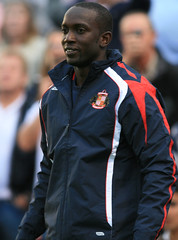 Can anyone else pass?
Picture: Peadar O’Sullivan

The referee, in the end, cost us two points. But that situation has been well dealt with in Colin’s excellent piece and the subsequent comments.

Suffice to say, everyone I have spoken to is in agreement that if Terry had headed that ball in, it would have been a goal and if Etuhu had committed a foul like that on Hargreaves at Old Trafford, he would have had first use of the soap and the likes of Lineker and Hanson tut-tutting their way through MOTD’s 1 and 2.

So, let’s deal with the football because shocking referees should not distract us from the fact that we did well to get a point from a game against a <a href=”http://www.bbc.co.uk/dna/606/F8940649?thread=4890323
“>moderate Premier League side who are going through a sticky patch.

For much of the game we were well contained and never really looked capable of being convincing winners.

At 4.30pm those huddled around your guru agreed that a point from this one would be a point won rather than two lost. And I fear the rest of the season is going to be like this – looking for points rather than imposing ourselves on teams who need to be imposed upon.

For all Villa’s neat and tidy play and their ability to close down space, they were beatable. Unfortunately, we don’t have players who can make this count. I thought Dwight Yorke was very good on Saturday because he does not give the ball away. However, he is the only one who follows that simple maxim.

Other players rush into passes and give hard won possession back to our opponents. Said opponents usually have someone with a bit of pace (Ashley Young on Saturday) who will run at our defence and put them under pressure. Chopra gave the ball away on Saturday, McShane was forced into giving away a free kick and Maloney whacked it in.

Two points lost and we are all aware of what that means – the R word. It is coming into use more and more. Another relegation would be the end for many long suffering fans who would be delighted to be like Villa – 20 years in the top flight, never in danger of winning anything but more to the point never in fear of being relegated.

There were signs that the Sbragia influence is having some effect. Higginbotham defended well and he and McShane looked more solid than before. But a commanding centre half is essential in the transfer window, as is a midfield enforcer who will tell players where to go and what to do.

Now we go to Reading which is another “must not lose” game. They are a club that punch well above their weight unlike us, who punch well below ours. There are times (usually when we are desperately trying to avoid relegation) when I think a franchise system might be a better way of running the top league.

Look at clubs like Wigan, Fulham, Reading, Bolton and Blackburn. What do they bring to the Premiership? The crowd at Wigan was 16,000 against a club 25 miles up the road while Blackburn were nowhere near filling the visitors’ end.

Bolton took half the fans to Manchester City that we did and last week Fulham took 300 to Everton. The Premier League needs clubs like Sunderland, clubs that bring an atmosphere to away grounds and fill their own grounds. Our gate of 43,000 on Saturday was magnificent; I was impressed, too, with the Villa following.

Then I get real and I know that you get into the top league on merit. It’s interesting that Wigan and Fulham are rich men’s playthings and that both have spent considerable time in the bottom two divisions. Take Whelan and the Phoney Pharaoh away and they would sink quicker than a canoe off the Hartlepool coast. We must survive this year and then push on next. The alternative is unthinkable.

Next Post
Can one of those dodgy decisions please go our way?