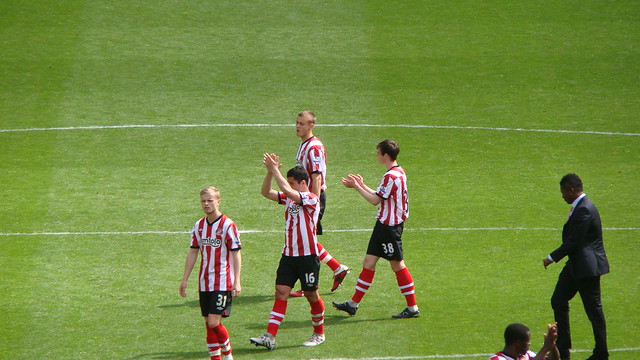 Not that I was in the remotest bit interested in United. My attention, along with the other 600+ Reserve Regulars, was clearly focused on those players who might just make it into Martin O’Neill’s first selection on Sunday.

Ryan Noble may well be one of them. He scored a hat trick in 20 minutes and claimed a fourth just before the end. His running off the ball was impressive and, to use managerspeak, “he knows where the goal is”. The second and third goals were great examples of a predatory striker – a shot across the keeper from a wide angle and a downward header that was unsaveable.

A substitute’s coat at the very least for young Ryan on Sunday and no loan move in the New Year; he’s far too valuable an asset to be wasted on the likes of Burnley or Crystal Palace.

David Meyler played a full game in his usual non-stop way and scored the equaliser after we had initially gone behind, while Craig Gardner looked a good player in his advanced role. He put us 2-1 up with a thunderous free kick that left the experienced Tomas Kuszack rooted to the spot. He also played a couple of really good balls through to Noble and looked keen to impress.

David Vaughan and James McClean were the other two midfielders looking for Cattermole’s shirt on Sunday. Vaughan, as neat and tidy as we have come to expect, went off with Gardner on the hour, while McClean played the full game. He can cross the ball really well and at times is reminiscent of Alan Johnson at his best. He is another who should be able to reserve a bench coat for Sunday.

Titus Bramble strolled through 70 minutes alongside Matt Kilgallon. Titus is still carrying a bit of weight, but he may be the player to stand up to the physical presence of Yakubu. Kilgallon showed that he would be a good signing for any Championship club in January and I would imagine that there was a veritable jamboree of scouts in the stands watching him.

Once the big boys had gone off, and three reserve regulars – Adam Reed, Craig Lynch and John Egan – came on, the game became more like the usual reserve team fare. Steve Bruce called it his “development squad” and it will be interesting to see how the new manager treats it – development or stiffs.

Keith Bertschin was in charge and it looks like he is staying for the short term at least. That is good news for the club; he has done an excellent job, coaxing and convincing young players.

United had a young team out, with some good looking players. At full back Marnick Vermul looked good and scored an excellent goal, while Paul Pogba was very tall. In fact, it was a big side, apart from Jesse Lingard and they did well against a much more experienced Sunderland side. One or two of these might be getiing a run out in the Europa League as a punishment.

Now for Sunday. It will not be an easy game and the news of Bendtner’s groin strain means we are very short of experience up front. Ji did little to convince me of his credentials on Sunday, while it may be hard to throw Noble in from the start.

Whatever formation he chooses, O’Neill is assured of a 40,000+ crowd to welcome him to Sunderland. There were very few tickets available away from the upper tiers when I looked on Tuesday, so here’s hoping that he gets off to a better start than another “Messiah” did when he made his debut against Blackburn on August 21 1985. Lawrie McMenemy’s team went down 2-0 and Seamus McDonagh was in goal. Twenty six years later, he is MON’s new goalkeeping coach, hoping to play a part in kick starting another new era.

Next Post
Blackburn ‘Who are You?’: the wild rover not wild about Newcastle