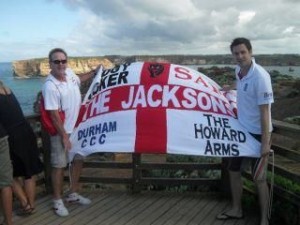 It is not often that something that needs an airing here appears first at the Salut! Sunderland Facebook page (you can join the group by following this link).

This is an exception and one that deserves a wider audience. Posted from Cancun, Mexico as M Salut’s holiday nears its end, here is the mini-tribute by Martin Emmerson, from BBC Radio Newcastle and one of Salut! Sunderland’s great friends to George Summerside:

Lads, the weekend was marred by a great deal of sadness for many Durham and Sunderland fans following the sudden death of George Summerside.

Podgy was part of the Barmy Army and travelled all over the world watching England’s cricketers in action, while promoting Sunderland AFC, Durham CCC and any Sunderland hostelries who were prepared to give him a bit of beer money.

One of the game’s characters gone. A great bloke with a big heart. And his passing has shocked many people. He was 53.

In the photograph, Podgy is on the left. Many of you will have seen this flag many times on TV. He was very clever at convincing stewards to allow him into sections of grounds so he could put his flag up, right behind the bowler, for all to see on TV. He was also very clever at sourcing tickets for people too.

* Another friend, Georgia Lewis, added the comment “Rest well, Podgy! Sounds like a top bloke” and it would be hard to improve on that.

Next Post
Sixer’s Soapbox at Peterborough: no banana skin at London Road