There is plenty right with football. The thrill of seeing your team reach the FA Cup 6th round, or producing matchwinning finishes two years running against the likes of Manchester City, would be enough on their own to prove the point. Billy Sharp’s t-shirt tribute to his baby son, who died aged just two days, was another example (as was the referee Darren Deadman’s decision to keep card in pocket as Sharp celebrated a goal by lifting his shirt to show the message “That’s for you son”).

And then there are the things that are wrong.

Step forward one Adam El-Abd, the interesting mixture of west and east in the name a result of Anglo-Egyptian parentage. 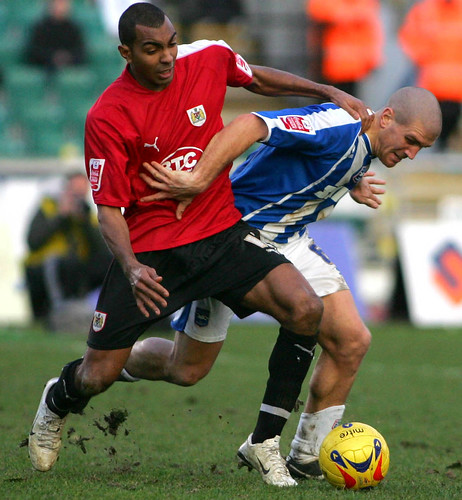 Image: petegawlik. Bit of a habit?

It takes a lot to make Monsieur Salut feel sorry for the Liverpool and former Newcastle United striker Andy Carroll. It is not his fault he looks a bit of a waste of money at £35m, or indeed that he looks like a bar-room brawler. And nor does a team that wins 6-1, against a side from a division down, especially need sympathy in any case.

But no fair-minded neutral, in terms of the Liverpool v Brighton FA Cup 5th round game, can have been other than appalled by El-Abd’s attempt to apply the rules of wrestling to the task of dealing with Carroll’s strength and aerial potential. Actually, the wrapped arms and flailing were so theatrical that it was also possible to be amused and appalled at the same time.

Every time there was a corner or set piece leading to a cross into the Brighton box, at least during the 70 minutes our pantomime villain was on the field, El-Abd was clearly visible in his efforts to hold Carroll down or back or, in one particularly bizarre incident near the end of the first half, back down after both had ended up on the ground and Carroll was first to scramble to his feet.

It was fitting on that occasion, and another earlier in the same half, that El-Abd was so busy mauling Carroll that he was unavailable to help defend in a more conventional manner, leading to the first two Liverpool goals.

If you missed the match, you may by now be wondering whether there was a referee on the field.

There was indeed. But it was Andre Marriner. And the man who once saw a red card assault in a Michael Turner challenge that even his (Andre’s) mum thought innocuous found nothing untoward in the serial offending perpetrated before his eyes. Maybe he thought he was refereeing a Toulon rugby match involving El-Abd’s brother Joe.

But on a serious level, Marriner either failed to see or declined to act on blatant, indefensible fouling that ought to have brought at least three penalties for Suarez to miss in the first half alone. And when you consider the cards he and his colleagues wave about for what used to be considered robust but fair tackles for the ball, it is simply lamentable that such tackles on the man go unpunished.