Paul Goldsmith continues his fascinating diary for Salut! Sunderland from the fleshpots and drinking dens – sorry, museums and art galleries – of Hong Kong. A pre-season visit by Sunderland AFC for the Barclays Asia Trophy (“meaningless” say Spurs fans, now) allowed him to mix with fellow fans, friendly opposing supporters (one lot at least), players and club officials and the Lady Boys of the East. Read on …

Tuesday morning and we’ve checked out of hotel room (term used very loosely) in Chungking Mansions and jumped into one of those red and white taxis over to the Cosmopolitan Hotel in wanchai where Carl and Robbie were staying.

This was after a decision by Tom, Lynne and myself to leave Kowloon to stay with the majority of the Sunderland lads and lasses.

The difference between Kowloon and Hong Kong was immediately apparent, as Kowloon was a lot more downmarket in appearance than our new destination.

As we got closer to the Hong Kong side of the island, it became alive with neon lights and people everywhere. I’ve witnessed many a big city through the medium of football and never fail to be impressed by such sights.

We walked into the reception of the hotel and it was full of SAFC fans, all the usual faces you expect to see on these trips, changed over the years only by age.

Unfortunately, there weren’t rooms available and whilst Lynne (is it just me or has she acquired an ‘e’ _ ed) found a nice hotel round the corner, I went for the suggested pragmatic approach and took up Carl and Robbie’s invitation to book into their room for the rest of our stay.

After dropping the bags off at our respective rooms and hotels, we headed up to the main drag in Wanchai and to a bar (surprise, surprise) called the Devil’s Advocate which is run by a Sunderland lad and is all ready bedecked in red and white.

By dinner time it was already filling up with Sunderland fans and, conveniently, the scaffolding at the front of the buliding was an excellent place for the lads to hang all the various St George’s crosses etc.

It felt like we were slowly reclaiming this small part of Hong Kong back from the Chinese as locals often peered on in bemusement. Uncannily, three doors down was a Man City pub and they were similarly doing their bit to colonise the island again. We drank into the night… 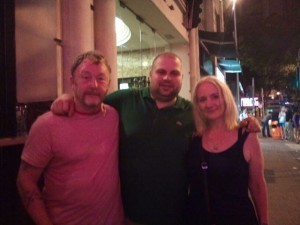 Wednesday afternoon wore on and we decided to walk up to the players’ hotel as they were due to leave (all three clubs had on open training session at the stadium that day).

Unbelievably dressed in our shorts and t-shirts (and smelling no doubt of alcohol) we managed to blag our way past security and loiter about in the lobby; amazing where a bit of confidence and swagger gets you!

We managed to grab a few words with Danny Rose who wouldn’t commit to saying if he thought a transfer was possible. Big Niall was as accommodating as ever, posing for photos etc, as were Spurs’ keeper Brad Friedel and Alan Curbishley.

They, in comparison, were nowhere near as accommodating as one of the SAFC staff members who gave us the match tickets we desperately needed. RESULT.

We jumped into a taxi and went down the stadium where we inevitably persuaded ourselves to grab another beer before settling down to watch the lads train. It was a fairly light session and undoubtably more of a PR exercise than anything else. When the session finished the lads signed autographs for the fans and locals and Westwood threw his gloves into the stand. Tom caught one and amazingly, one of the other lads, who was over the other side of the stand, caught the other. RESULT 2.

As James McClean signed some stuff for people, somebody’s stray comment about it being a Celtic signing on form brought more than a few sniggers. He unfortunately stood out a mile in training, appearing to be miles behind the rest of the squad in ability at present.

Back to the Devil’s Advocate, where drink started to flow and the Sunderland and Man City fans got on famously.

All joy, humour and the sharing of one another’s songs. Still no sign of any Spurs fans. We transferred to one of those Asian bars where an abundance of pretty women appeared to be out by themselves, and naturally fancied overweight, balding English men.

I’ve spent a lot of time in Thailand and indeed met my ex-wife and mother of my youngest child there. I know all about these things and there’s plenty of genuine women around, but there’s more, let’s say not so genuine ones, with these ladies certainly seeming the latter.

It’s around 4am now and we’re heading home. Or I was. Bumped into an old, nameless friend and despite his warning of what may happen if we went for one drink together, we did just that.

We legally kidnapped a random Sunderland fan and the next 24 hours are but a blurry memory of reminiscences on England and Sunderland trips, ignoring the requests of random women and forcing one house band to play Wise Men Say around five times.

I woke in a short stay hotel that I can’t remember booking into and noticed it was around 11am. Went for a quick change and was persuaded to head to the Devil’s Advocate where Man City and Sunderland had both started to grow in numbers. Much to the bar owner’s surprise, the atmosphere was still friendly with everybody mingling and having fun. Off to the match now, I almost forgot about that.

On approach to the stadium, with the Sunderland fans naturally in fine voice, we came across the rarest of sights. Some Spurs fans.

They had bothered after all. There was real concern about the game because of the weather, as I’m sure you’re aware. It was a relief when it became clear it would be played and the atmosphere was pretty decent under the circumstances.

You could hear the old Roker Roar spread right across the stadium. As for the game – I really enjoyed it. Play was as purposeful as it could have been on that pitch and it all feels a bit different. In a good way.

Wes Brown was man of the match in my opinion, marshalling the back four and looking really sharp. Jack Colback played well at left back, looking cooler and faster than usual.

Karlsson looked tidy and composed when he came on and topped it off with a goal – James McClean’s future looks ever more in doubt. Cabral looks like an upgrade on Cattermole and all in all I think we played well and hopefully will pick up our first bit of silverware on Saturday under PDC.

Back to that Devil’s Bar again where we were later joined by Margaret Byrne (SAFC CEO) and Gary Hutchinson (commercial director) and they were really nice, conversing with everyone and being particularly friendly. It was quite surreal having a drunken conversation in Hong Kong with Margaret Byrne about ghosts! Being a fan abroad is great.

Tomorrow night the club have booked a bar for SAFC fans and given us tickets for three free pints each, at £6 a pint that’s a lovely touch and most welcome.

Sunderland and Man City fans danced away into the night, being snapped by bewildered locals and undeterred by the monsoon conditions. Niall Quinn’s Disco Pants was the inevitable jingle of the night.

Thursday and a chilled day. A trip to Macau on the ferry and I’m sick the whole way. I won’t be told this is a hangover, it’s definitely sea sickness.

Our Stephen used this excuse on the ferry when we went to the World Cup in Germany in 2006 so I’m happy to steal it in this case.

What to do next…

6 thoughts on “Hong Kong diary: (3) getting on famously with Man City, but where’s Tottenham?”