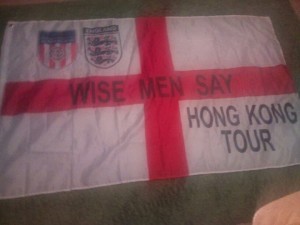 Our own Stephen Goldsmith’s brother, another Goldy but called – we think, after a spot of low-key detective work – Paul, made the bold decision to head East to take a look at Sunderland in action (in earnest, sort of, in the Barclays Asia Trophy also featuring Spurs, Man City and South China). Beer features a lot …

Well the day has finally arrived and it’s time to dig out the passport, shorts and Hong Kong phrasebook (English, as well as Cantonese is an official language, but your Mandarin could come is handy, too – ed), as I start my 7,515-mile journey to watch the latest stage of PDC’s revolution in the Barclays Asia trophy out in Hong Kong.

I’m not a professional writer, nor indeed have I been any kind of writer since leaving school in 1995. I’m a 34- year-old taxi driver who has agreed to try keep some kind of diary for my brother Stephen, who is the talented wordsmith of the family (debatable – SG) as unfortunately he couldn’t make the trip.

The journey started at noon on Sunday with the taxi ride to the Centurion bar in Newcastle. Here, myself and my travel companions Tom Goodey and his beautiful wife, Lynn, were to meet up with fellow red and whites, Carl, Robbie, Gary and Jamie from South Shields. You always could rely on a Shields contingent to boost the Lads’ ranks at away games.

As we walked in the bar Wise Men Say was playing through the bar’s speakers (the song, not the podcast). This is surely an omen for a great trip ahead? After several beers, it was time for the 1.30pm train.

Up to Glasgow and on our carriage were several hungover hen and stag parties who kept us entertained with renditions of 500 miles. This was as stereotypical as it sounds; other than wearing a skirt, frying Mars Bars and tossing the caber, you couldn’t really get more Scottish!

On arrival at Glasgow, we went to the Toby Jug Bar for more beer as members of our small travelling group became more acquainted with one other.

Conversations hadn’t turned quite to Valentin Roberge and the like just yet though. We then headed up to the airport, checked in and again had more beer later. (I was starting to see a pattern here and realised these were my kind of people). Most the conversation round the table now began to divert to talk of previous away trips following the Lads, and also of excitement at Paolo and Ellis’s rebuilding programme. Then news reached us that Peruzzi’s injury had shown up in his medical.

Could only happen to Sunderland …

The Emirates flight could not be faulted with an abundance of films, sitcoms and hugely varied music to choose from as we approached Dubai to catch our connecting flight. I had a vodka whilst listening to the Stone Roses whilst admittedly looking at some of the most gorgeous air hostesses in the world. Life is good.

We had a quick turnaround in Dubai, unfortunately being unable to get seats together but just seven hours from Hong Kong.

Surprisingly there were no other SAFC, Spurs or Man City fans on our plane although there was a Chinese girl in a Rotherham shirt, random even for Asia surely!

After landing, we headed of in taxis to our respective hotels for the evening. Ours was in chunking – is that a geographical location or an interesting adjective to describe what it’s like – ed? – mansions, Nathan Road, China. Small and basic aren’t the words; even by Asian standards these are small.

Me, Tom and Lynn checked in and headed of out for a few beers and some street food as it was about two in morning. It was fairly quiet but we still had a good first night and found beers averaging four quid a pint although one bar was seven fiftyish for a vodka.

Well its now 9am on Tuesday and we’re heading over to Wan Chai where the majority of fans are staying, as we need to try source some tickets for the games. However, we do have tickets for a training session later in week.

So after completing the first 7,514 miles, the trip really starts today. Let’s just hope the players didn’t drink as much as we did getting here! Wise men say …

: Fancy leaving a comment? Not sure what you have to say fits this post? Go to the new feature – https://safc.blog/2013/07/salut-sunderland-the-way-it-is/ – and say it there.

10 thoughts on “Salut! Sunderland’s Hong Kong diary: (1) where are the Tottenham and Man City fans?”