I don’t want to raise hopes too much but Southampton did something very rare on Saturday and let in a goal. What’s more, of only three previously conceded, one had been scored by Sunderland, back in those heady days when we could actually say we were unbeaten away. Chris Rann*, the power behind georgeweahscousin.com, does not offer a prediction for Wednesday night’s Capital One cup – a place in the quarter finals and a home tie against Chelsea awaiting the winners – but says the prospect of the Saints claiming the trophy excites him more than England’s World Cup trip to Brazil …

Salut! Sunderland: Apologies for the “t” missing from Southampton in the original headline for this interview. Chris, this is our second meeting of the season already: we have been through the wars since the first and I heard Saints described on radio tonight as everyone’s “flavour of the month”. Should we assume there’s a good feeling at St Mary’s?

Chris Rann: I’m not sure I’ve ever know it so good. We have a very good team, playing very good football, and finally a defence that doesn’t have us in total panic with every attack. On Saturday the atmosphere was electric, and Fulham (a mid-table team in this league) were torn apart. I get the ‘flavour of the month’ label and it’s a very odd feeling to see journalists and fans of other clubs not dismissing us as fodder for the big clubs.

You said last season the sky was the limit if only you secured your Premier place. That was done comfortably; in what shape do you see the Saints being five years from now?

Good question. I’m not sure, my traditional pessimism with Saints wants me to say “steady Premier League mid-table side” but with the ambition and financial muscle of the club, the continuous supply of fantastic kids through the youth system I think the aim should be higher. Five years ago we were bottom of League One. Nicola Cortese arrived and said he wanted to be in the Premier League in five years, he did it in three and the progression doesn’t seem to be letting up.

And yet Osvaldo is reportedly after a move already. Whatever the truth of the reports, is he finding it hard to settle?

The article in question was a mixture of poor translation and word bending for a story. What Osvaldo actually said was that he would like to play for Boca Juniors before his career ends, he was dismayed by the stories and looks to be loving it at Saints. He is still to find his feet on the pitch, but there have been some flashes of brilliance and you can see that his touch his sublime.

How important is the Capital One Cup to you and why do you reckon it attracts such paltry gates?

To me personally? I’d like us to give it a real shot. We have a team capable of winning a trophy so why not? I’m not going to criticise attendances as I haven’t been to one this season, I think the fact that in the two previous rounds fans knew that the team would be weakened yet the prices weren’t drastically reduced put people off.

Were you surprised after our early encounter to see us struggle so much, sack PDC and seem, until the Wear-Tyne derby, relegations certainties?

Not at all. I felt we should have beaten you and beaten you well in that game. Di Canio is not someone I really ever warmed to as a person and the talk of his methods meant I wasn’t surprised he couldn’t last. It’s all very well treating League One players like it, but you won’t get away with it in the Premier League. I think your chairman made a big mistake in hiring him, and was right to rectify it as soon as necessary.

Did anyone in our team strike you as the sort of character that could cause you problems?

In that game? No. But Steven Fletcher didn’t play. He will always be the man to watch in your team. I like him a lot, mainly because he is an old style forward. No bells and whistles, but will always score goals.

And who is doing the business, aside from Rickie Lambert, for you so far this season?

This is going to sound cheesy, but the whole team has been superb. If I had to pick somebody out for special praise I would say Adam Lallana has been exceptional, after a quiet 2012/13 I think Lambert’s England call gave him a wake up call. He is putting in real ‘captain’s’ performances and looks unplayable for defenders at times. Also Nathaniel Clyne, the best right back in the league. Consistently outstanding.

Poyet managed Brighton along the coast from you. Still a long way, 60-odd miles, but did you Did you get a shared south coast insight into what sort of job he was doing and why it ended in tears?

Ah… Gus. You will have to forgive me if this becomes a long answer. Mr Poyet and Saints have had a fiery relationship. Many believe it is because he was interested in the Saints job when Pardew was sacked but was overlooked, but I don’t know if there is any truth in that. Anyway, what happened during the League One days when Brighton were our main rivals, both locally and in terms of challenging for promotion, was a lot of sniping and bitterness (from both sides). The stand out moment was when (after Saints ended Brighton’s year long unbeaten run at home) he told the media that Saints play poor football (categorically not the case under Adkins) and were nothing without Rickie Lambert. He actually said that if you gave Dagenham and Redbridge Rickie Lambert they would be as good a team. We can’t stand him. We find him obnoxious and arrogant and we took great pleasure in overtaking his Brighton side.

Is he a good manager though? Yes. He will have you playing nice football and I think you will have a decent chance under him. His Brighton team took gamesmanship a little further than I like to see, lot’s of play acting, yellow card waving, time wasting and niggly tackles, even their centre halves used to dive! But, that was part of their success. I think he lost control of his emotions (and perhaps bowels) at Brighton in the end, and fell out with the board.

Do you hate Pompey so much that their steep decline amuses or pleases you or does a little bit of you wish they’d become top-flight rivals again?

I don’t “hate” anybody. Hate is too strong a word for a football rivalry. Do I take pleasure from them getting their long overdue comeuppance, of course I do, to a degree. I wouldn’t have wanted to see them go out of business though, as fans are fans and they didn’t deserve that. The best outcome for everybody was that the fans themselves took over the club, they got what they wanted and we can sit back knowing that it means any sort of resurgence is never going to happen. I miss the derbies of course, but no one wants such a small club with such poor facilities making the Premier League look untidy do they? They had their time in the sun and they enjoyed letting us know, sadly for them it was all on tick.

Have you a clear idea already of this season’s likely top four, bottom three and winners of the FA and Capital One cups?

Not at all, it looks like the league could be the most open for years. Liverpool look like they are top four challengers again and Spurs and Everton are going well (not to mention Saints ;-0 ). I think Palace are down but the other two places are interesting and will likely be filled by yourselves, Cardiff, Hull, Norwich, Villa and possibly even Newcastle and Fulham.

I have a feeling Mourinho will have a big say in the main trophies again. A Chelsea double?

If one or both of our clubs did not appear in either of the top/bottom lists, where will they end up?

I think we will finish between 8th-10th if I’m honest, we might not have the depth to sustain a few injuries to keep up this fantastic start but should be able to keep a steady flow of points. I’m sorry to say but I think bottom five will be your home for the rest of the season, hopefully for your sake you can finish in the higher end of it.

Excited about Brazil 2014 or far too concerned with the Saints to care too much (unless Lambert goes)?

There are several players in our team that should be in contention along with Lambert, Lallana, Clyne, Shaw etc. but the reality is they probably won’t. I’ll always follow England, but I’m nowhere near as bothered as I used to be. I’d rather see Saints win the Capital One cup.

What most inspires you about modern football and what appals?

I’m inspired by the level of quality. If you think of some of the superstars back when the Premier League first started, some of them would struggle to get a game in the Championship now. The Premier League get’s a lot of criticism but the money has meant I get to watch brilliantly technical players on a weekly basis. What appals me is the level of ‘simulation’ and the lack of urgency to do anything about it. Not a game goes by now without at least one incident where somebody takes a tumble, and still refs don’t head for their notebook. I would genuinely make it a straight red offence.

I don’t suppose there’ll be big travelling support for a midweek cup game. How will you keep tabs if not going and what will be the outcome?

I haven’t decided yet. I live in the Midlands, so it’s not quite as bad for me as it is for most, but still a trek. I will most likely listen to the Saints player coverage if I don’t go. Radio is such an underrated medium to “watch” football on, makes any game at least 60% more exciting than it is. 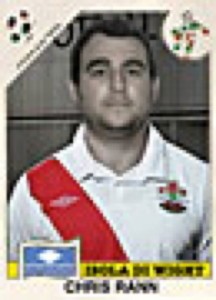 * To fill in the gaps, on Le Tiss, Keegan, McMenemy and his own highs and lows as a Saints fan, have a look at an previous “Who are You?” interview with Chris Rann, who describes himself thus: I first went to watch Saints in the 1991/92 season and I was soon an ‘addict’, I started writing about Saints in 2010 and also became addicted to that. I now write about Saints for my own site http://georgeweahscousin.com, ESPN and Metro. Having served in the Army and worked for a worldwide sports event, I am currently writing a book about the hopelessness of following a football team from various random world locations!

Fancy leaving a comment? Not sure what you have to say fits this post? Go to the newish feature – https://safc.blog/2013/07/salut-sunderland-the-way-it-is/ – and say it there.

Next Post
Sixer’s Soapbox: lots to enjoy – but then we had to watch the match!