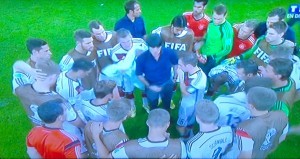 I loved the final as well. Two careful, thoughtful teams working each other out, searching and probing and looking for that elusive opportunity that would win the ultimate trophy for them.

And so it is over. Russia 2018 has an awful lot to live up to on and off the pitch. Before that we have Euro 2016 in France and Pete Horan has just bought a camper van. I wonder if there will be any games in Nice or Le Lavandou………..

Next Post
Could Borini return to Sunderland and fire a Europa League challenge?