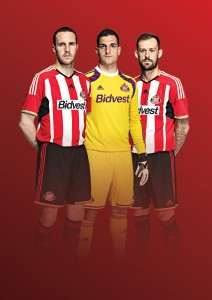 The three footballers in question are John O’Shea, maybe not bound for White Hart Lane, Steven Fletcher, surely raring to go after last season’s disappointments, and – with the new goalie’s top – Vito Mannone, presumably living up to his denial of those rumours suggesting itchy feet.

So there you have the new home kit as leaked last week – I say “leaked” but cannot truly be bothered to compare and contrast – and as revealed by SAFC.com today.

The kit is officially launched on July 25 but – this is the reasonable quid pro quo for the use of images, one I volunteer rather than being insisted upon from SoL towers – already avalable for advance order (delivery on launch day) at www.safcstore.com.

‘Click and collect’ is also available free of charge, whereby fans can order their shirt in advance to be delivered to the Stadium of Light store or The Galleries, Washington, to collect in person on launch day. This must be ordered online at safcstore.com. The pre-order service is available until midday on July 22.

This, while we’re on, was the new away kit:

Feel free to say what you like and don’t like about either …. provided new kits don’t take the p***, I tend to be more concerned about the identities of those about to wear them and how they play.

Next Post
The Robson Report: Brazil 2014 – overblown, over hyped and over on Sunday