Only tiny glimpses of Johnny Crossan, from after his SAFC days, in this clip of a 4-1 home defeat of Man City by Chelsea. In one of them he acts as peacemaker after Mike Summerbee appears to stamp on Eddie McCreadie. But it has been a privilege to run the interview with him, not least because although Johnny played with Colin Bell, Mike Doyle, Summerbee and other City stars, it is his time at Sunderland that he remembers most fondly …

Just about time to wrap up the three-part interview with Johnny Crossan, reproduced from four years ago for the benefit of readers of Salut! Sunderland who missed it back then.

My thanks to the many people, including those too young to have seen him play, who have visited the site – or revisited it – to read about him. This was the final instalment as published in 2011.

The first two parts can be reached by clicking on these links:

The final part of the the interview took the form of Johnny’s quickfire answers to a final burst of questions:

Another club that should be buying better players than they do

One word to describe Charlie Hurley:

How did it go in the 5-a-side after we spoke last Friday.? You said you’d get a hat-trick.

* Johnny remembered it as his second goal, but that was a penalty so he clearly meant the first, described here by Phil Johnson, writing from flood-hit Thailand, in these terms:

“He picked up the ball on the left wing, close to the half way line, and went past a couple of players and then cut inside, beating another 2 or 3, then from the centre of the 18 yard line he drove it into the net.
He did, almost, the same thing for a second but this time was slightly inside the penalty area and was upended – he then scored from the resultant spot kick!”

** I can find no trace of such a game. Maybe one he played after leaving Sunderland. Boro, his last club in England, did play a 2-2 FA Cup draw in a replay at Hull City in Jan 31 1968 before winning the second replay. Yeovil is a long way from Hull, though. Maybe there is statistics sleuth out there who can track this down.

STOP PRESS: I have just asked Johnny again about this and he now realises it was an FA Cup game at Gravesend (a 1-1 draw on Feb 12 1963) – “terrible pitch, I think we got lost on the way to ground, we were dreadful”. He got two goals in the 5-2 win in the replay, Sharkey, Mulhall and Fogarty getting the others. 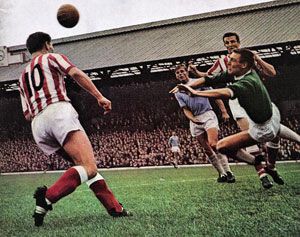 *** Great quote from Brian Leng’s interview with Johnny for The Roker End, to whom thanks again for permission to use photos: “We were all sitting in the dressing room when Cloughie shouts to me: ‘Young man – do you realise this club has paid £30,000 for you to get goals for me and since you arrived you’ve not created one chance?’.”

And finally, thanks again to Johnny, to whom life has often but not always been kind but who has plenty of great memories to look back on. I will dedicate these interviews to the memory of his wife, Barbara, who loved Sunderland but died five years ago.

6 thoughts on “The Johnny Crossan story revisited: (3) what Brian Clough told him”