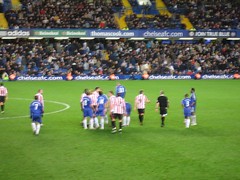 Week after week, good news or bad, Pete Sixsmith faithfully texts scores, results and verdicts to Salut! Sunderland. Saturday was Chelsea avoidance day, and he got his updates from Abu Dhabi

Saturday found me absent from Stamford Bridge, so my observations are for once based on Match of the Day and what I have read in the various newspaper reports.

Colin, thousands of miles away in the UAE, saw it on TV and he was in the interesting position of texting the scores to me. I was dreading the sound of the mobile buzzing, so low were my expectations.

For once I was not disappointed. The reporter on Five Live dismissed us in four words – “hard working but limited” – and then spent the rest of his piece discussing whether Mourinho should manage England.

Sunday’s Observer wasn’t much better and suggested that a return to the Championship was in the offing if we did not sign the right players in January, while this morning’s Guardian focuses on Terry’s attitude and Miller’s foolishness at walking straight into a red card.

It was a long wait on MOTD on Saturday as we appeared last of six, the BBC obviously feeling that a dull, dreary, predictable Chelsea win was hardly conducive to retaining viewers.

The defending for the first goal was well up to our usual standard – Higginbotham not quick enough to get near Shevchenko, while the penalty was totally avoidable, rounding off another dismal day for our ex-Stoke, Southampton and Derby defender. Not a great pedigree, is it?

The sending off is dealt with elsewhere – suffice to say, the cat jumped off the settee as a well aimed volley of abuse was directed at my new Panasonic Vierea.

Incidentally, why can’t we have a TV set named after one of our former midfielders? What about a Samsung Buckley or a Toshiba Chisholm or maybe even a Hitachi Berry?

I didn’t make the journey because I felt that a ticket priced at £45 was too much for a game that was only likely to end in defeat. That works out at 50p a minute, a ridiculous sum for a sport that used to be the province of the working man. I work and I’m well paid, but prices like this make me wonder how on earth we can sustain the game.

When I started watching Sunderland in the early 1960s, adult admission to a game was about 20 per cent of the price of a shirt. Now, you could buy four decent shirts at M&S for the price of a seat at Stamford Bridge and you wouldn’t have to put up with a load of patronising Chelsea fans.

I’ve never liked Chelsea. They are an early version of MK Dons being created as a club because there was a ground available. Unlike Sunderland, they are not rooted in their community – they don’t even have a community – and they draw fans from all over London. I was there in 1985, probably the most frightening night I have ever had in a football ground. The sight of Colin West nutmegging a galloping police horse will always be with me.

So instead of paying exhorbitant prices at the Bridge, I took off with a couple of mates to watch Darlington’s first visit to Christie Park, home of Morecambe.

There I paid only £10 to get in (turn your hood up, shuffle and ask in a shaky voice for a concessionary ticket). Great value I thought until the heavens opened and the monsoon season arrived in Morecambe. The referee quite rightly abandoned it after 20 minutes which meant that my afternoon’s football came in at exactly 50p a minute – which is where we started.

Next Post
We don’t know what we’re doing, but nor did the ref