It was a special day.

At about half three I was in the Liverpool Women’s hospital, holding my new-born granddaughter.

“It’s been a good weekend,” I said to Peter, my Blackburn-season-ticket-holding-son-in-law.

“Yes”, he said. “Before Leeds I said all we needed was three points and a baby”.

And I hoped like hell, as we drove home, trying to hear the radio above the noise of grandma and auntie Helen in the back, that that’s what it would be.

Even Dick thinks so, as he lets Colin, and maybe one or two others, know.

But, believe me, good as Jermain Defoe’s strike was, becoming a grandad for the first time is better:

Please pass on my congratulations to John. I understand why he couldn’t be there and I forgive him.

The work rate and effort was fantastic; I always say if you put the effort in and work hard you get the results.

It was a difficult game but we deserved to win it because we were the much better side and applied pressure from the off.

Jermain [Defoe] worked himself very hard; it’s the first time I’ve seen Billy Jones play and I take my hat off to him after that performance today.

We were just waiting for the goal, we were creating chance after chance and really putting Newcastle under pressure and then with that little bit of luck came that shot from Defoe. 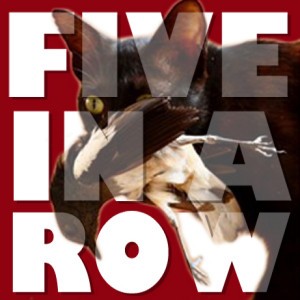 To win five in a row is great; but we need to think about the present, now what is important is the three points and now we have to build on this when we face Crystal Palace.

The fans were terrific; they were so excited, it gave me a special feeling. I’m happy for my team and the players, but even happier for the fans.

When we arrived at the ground you could feel a special atmosphere and that was there all the way up to the final whistle.

And happy, happy birthday, Hazel. Born on the day we did five in a row.

5 thoughts on “Advochaat: three points and a baby”