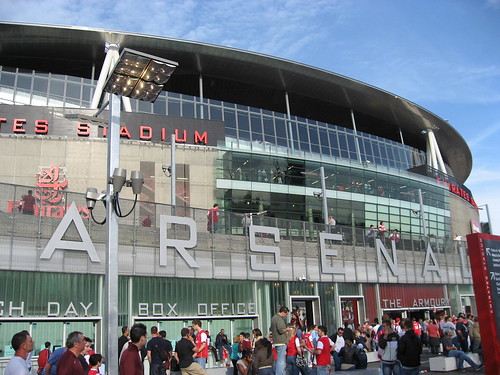 Yet to listen to or read the views of supporters on today’s talk-ins and online forums, they are a club in crisis. Even the calm, eloquent Arsène Wenger talks of the 4-0 hiding in Milan as “shocking`’ and a “disaster”. And plenty of Gooners, even those who once adored him, want Wenger out.

Clemency Burton-Hill, the Arsenal-supporting musician, broadcaster and actress, said it last week, in the Who are You? feature before the Premier game.

This is how she put it:

People talk about where they were when John Lennon got shot; or when Princess Diana died. I can still remember, like it was yesterday, that moment in 1996 when we heard that this completely unknown French guy Arsène Wenger was coming from Grampus Eight to take over. I was 14 and had been a Junior Gunner for about five years and a season ticket holder for three years. I’d only ever really known the sunset of the Georgie Graham era (though I still have extremely fond memories of singing “Georgie Graham’s magic, ‘e wears a magic hat, and when ‘e saw the [insert appropriate cup] ‘e said: I’m ‘aving that!!’) and then life in limbo under Bruce Rioch. I’ve been a Wenger devotee ever since that day: he literally changed the game. It’s been said many times, but he brought intelligence, elegance, humanity and flair not just to Arsenal but to the English Premier League in general, which at that time was not nearly so influenced by foreign footballing styles. But… with a heavy heart, I have to say that I now think it’s time for him to go. It’s scary, because I revere and love him and he feels irreplaceable, but his decision to take off Oxlade-Chamberlain against Man Utd a few weeks ago was the clincher – I was at the Emirates that miserable day and I can’t remember the last time a boo reverberated around the home ground so viciously; it was ominous. So I hate to say it, but yes, I think it’s time for change.

See also: today’s pre-FA Cup Arsenal “Who are You?”. Click anywhere on this paragraph.

I heard the same clamour this morning. Heaven knows what Rupert and Monty think. But one man who did ring into TalkSport said there was no evidence of defensive coaching, no ability to cope with opposing teams’ breakaways and no way that 40 per cent of the squad were even worthy of Arsenal colours. He included Theo Walcott in that damning category.

Join the club, Gooners. Learn, with humility, what it is like to support a team you do NOT blithely expect to win every game. Leave cups in the early rounds, whinge about the teams that represent institutions that are less proper football clubs than global brands. Maybe even have the occasional brush with relegation.

And then, somewhere amid all that unfamiliar misery, rediscover the joys of football.

* With my usual thanks to “Wonker” for his Flickr archive of Arsenal-related photos.

6 thoughts on “Arsenal a club in crisis? Give us a break”