Early doors, they set their stall out and just about nicked it. The wantaway stopper between the sticks was different class and the gaffer is backing him to keep more clean sheets, which is just as well since he hasn’t been able to buy a goal since the lone striker issued his “come and get me” plea.

Yes, I thought about a quiet midweek romp through football’s awful clichés, beloved not only of footballers and managers, who can at least be forgiven for being inarticulate, but also the commentators and journalists who are actually paid for their supposed command of the English language.

The source would have been the good old Blackcats list, a deep reservoir of wisdom and humour among Sunderland supporters spread around the world from Wearside to western Ontario and beyond.

But after a good start, in which broadsides were fired, transfers “put on ice” and injuries “shrugged off”, the ideas dried up. It would not have stretched to a proper Salut! Sunderland feature without hearty plagiarism of the Colemanballs archive. 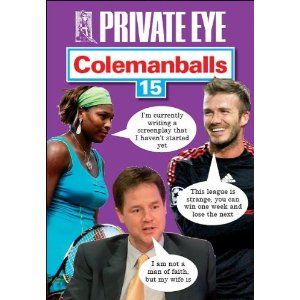 Then I came across a classic example of the misleading dross sports editors feel obliged to shovel into their pages and broadcasts. It was in the Newcastle Evening Chronicle and concerned Stéphane Sessegnon, whose form has at times been magical during Sunderland’s post-Bruce recovery.

The Chronicle is no better or worse than countless other media outlets. It uses all the clichés and dresses up casual training ground half-quotes as stories, but also comes up with viable interviews that draw me to its website pages from time to time.

Yesterday’s story about Sess not only fell into the first category. It managed to convey, by the time you’d read it, an impression that was the direct opposite of that created by the headline.

Sunderland fans would have been greatly reassured by the heading: “Stéphane Sessegnon: Arsenal switch is not for me.”

So far, so good. The lad’s happy at Sunderland, he is going nowhere. But read on (though there is not actually much to read) and you reach his direct quote, the first six words of which may well have been the reporter’s, not his: “Interest from some bigger English clubs? I don’t think about that. Above all I am just thinking about scoring and assisting.”

Even that we could live with. He’s hardly going to say he is already planning to move on if that is in his mind, and it is hard to see what more he can say if he is not. Bear in mind the story is written in the context of “talk of a summer move to Arsenal”.

But then we come to the only words of the story that matter, again attributed to Sess: “We will talk about my future again at the end of the season.”

Now that is worrying. Far from meaning, as the headline suggests, that an Arsenal move is not for him, it makes us fear that our hold on Sess is flimsy to say the least. I do not blame the Chronicle reporter, James Hunter, for the headline but I do reproach him for his failure to offer intelligent interpretation of such remarks as Sess allowed to pass his lips.

That is all the more pertinent when you consider how many people will have seen the Chron headline on newsnow.co.uk and followed the link in the belief they were about to have minds put at rest over Sess’s commitment to the club. When I looked a minute ago, the story was fourth in the newsnow hitlist of top Sunderland stories from the past 24 hours.

And when Sess switches to French, it is even more alarming. L’Equipe, which has a habit of getting footballers, especially those with French connections, to speak at meaningful length, quotes l’international Béninois as saying this about his former club Paris Saint-Germain, nowadays fabulously rich with Qatari gold:

“Of course I follow PSG’s results. It’s good that big names are arriving at the club, which deserves great things. Even though it’s now a year since I left, I retain my love for Paris and still have friends there, like Guillaume Hoarau, who I talk to regularly on the phone. Wear the PSG shirt again (hack alert: more words put in his mouth -ed)? Paris, it’s still Paris. Why not? But that’s not for today.”

The two references to Paris can be taken as meaning the club. It is common in France to talk of PSG as “Paris” so he is not just eulogising the city of romance (Paris, not Sunderland).

But taken together with negative-positive Chron story, it is depressingly fair to conclude that the season for unsettling Sess has well and truly begun.

* Get the best out of Salut! Sunderland by bookmarking the home page (click for it anywhere in this text) and using it to see, on each visit, highlights of the six most recent articles.

** Buy the Colemanballs books at knockdown prices – the one pictured is £3.64 – at Salut! Sunderland’s Amazon link. Click anywhere on this paragraph.

6 thoughts on “Arsenal, PSG and the unsettling of Sessegnon”

Next Post
Wolves ditch McCarthy: Sir Alex Ferguson and Dalglish could learn from him