Without wishing to start a civil war, we can safely state that when it comes to using the word Gooner, our second Arsenal “Who are You?” previewer, Tony Briggs*, does not quite see eye to eye with our first, Tom Watt. Tony describes himself as a “third generation Gooner” and proves, with his responses, to be a football fan – sorry again, Tom (he dislikes fan, too) – of the old school. Bring back standing, get people to stay to the end of games, end the ubiquitous matchday razzmatazz. Oh, and 3-0 to the Arsenal! …

How shocked were you by the Carling Cup final defeat to Birmingham and what did you make of the Orient replay?

It’s what we come to expect of The Arsenal now, not taking our chances when they mattered; Birmingham did. Orient was a game where there was many empty seats because alot of the fair weather fans made excuses and didn’t show up. Good all round performance and Bendtner and Chamakh getting the goals they needed to boost confidence.

Does last Sunday’s disappointment make it likely that we will suffer the backlash at the Emirates on Saturday, especially bearing in mind we usually lose there anyway?

I think the fact Chelsea beat Man Utd, is more of a factor for us playing to get three points

Our season has gone into a sort of meltdown after the bright start, but how do you see Arsenal’s going from here? Potentially, it could be a classic season for you.

I am hoping we can win against Barca and kick on from there. The league seems winnable more so than usual, at this late stage of the season

“Gooner”, according to Tom Watt, our other Arsenal interviewee, is an annoying modern term, one that really winds him up. He feels the same about “fan” and insists he is an “Arsenal supporter”. What do you say about that?

I’m a supporter of Arsenal therefore I am a Gooner, although the word derives from Tottenham fans poking fun at the name the Gunners. It was also used a lot more with football violence. A lot of Gooners don’t know the real history of the name.

Tim Boyd
And do you agree with him that you have to be a fool, or know nothing about football, not to be an admirer of Arsène Wenger?

Wenger knows more about football than so many of the pundits who slate him on various football formats. Allardyce loves to put the boot in on Wenger. But Sam, whilst you’re gracing and TV station and any club you can pimp yourself out to, Wenger is still managing the same team he was 14/15 years ago

How does the present day squad compare with the double team of long ago, the invincibles and other great Arsenal line-ups from history?

The greatest Arsenal team for me wasnt the invincibles, it was the 1998 team. They won the Double with great attractive football. Today’s crop? Nowhere near them in terms of heart but they have the skill to reach for higher ground than they achieve year in year out.

Who are your all-time Arsenal favourites and who would you be or have been pleased not to see in the club’s colours?

Ian Wright, Tony Adams, Thierry Henry and GOD Dennis Bergkamp. I’m not a lover of Dean Nelson (Denilson); if he is Brazilian I want proof. Diaby also is frustrating. He does something so amazing then he will pass to the opposition

Do you miss Highbury? 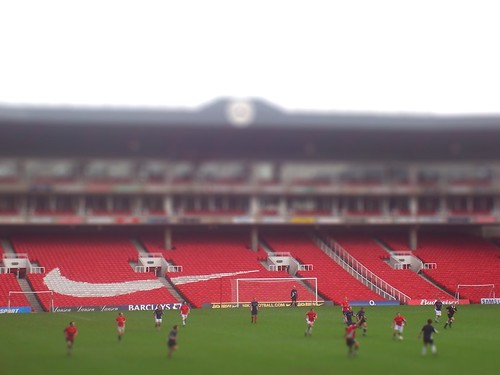 I know Arsenal supporters hated my “Eduardo question” but I have changed it to the Walcott question in recognition of what I thought was an honourable contribution to the debate on cheating. As a referee, what did you make of Theo’s admission that he had dived in an attempt to win a penalty, and his decision to make a public apology?

Theo is a honest lad but he shouldn’t have said anything. Now you will get fans labelling him a diver for as long as he plays. The day afterwards, Berbatov dived to earn a penalty and it’s all forgotten now while people still talk of the Theo one.

What thoughts do you have on Sunderland – club, city, region, supporters?

Never had a night on the town in Sunderland (yet) but when I have been up there you can share a joke and a laugh, there is no malice from the fans. Also they are quite loud; still it’s nothing compared to the Roker Roar.

Who will be the top four, in order, this season and who will go down?

Hopefully Arsenal, Man Utd, Chelsea and Liverpool sneaking back in.

Did the Fifa decision on Russia, rather than England, as the 2018 World Cup venue matter much to you? Or are you firmly club before country?

I’m English to the core but I can’t follow the England team with as much passion as I do my beloved Arsenal. How can I get behind people who sleep with their best mates’ wives, or shoot work experience staff or pay grannies for sex? It’s immoral.

What one measure should your club or the FA take to make the ordinary suporter’s experience of football better?

Get rid of the seats, bring back standing. All this “matchday experience” is absolute American garbage. I go to football for football, not to shout a player’s surname out when prompted.

Your highs and lows as a supporter?

My high: Anfield 89. Nothing will ever come close to that eve-e-e-e-r. Low: our defeat to Tottenham in 91 semi final still makes me sick.

You’ll be at our game. What do your reckon will be the score?

Hopefully 3-0 to the Arsenal.

* Tony Briggs is a qualified referee who came to Salut Sunderland with some good, thoughtful points during the debate on the awful injury to Aaron Ramsey. He is a welcome contributor to the “Who are You?” series.

** See the interview with Tom Watt by clicking here.

*** And Arsenal’s 12th man: Danson in the dark at Highbury

9 thoughts on “Arsenal v SAFC: nothing to match Bergkamp – or the Roker Roar”