For Methodists, the Rev Leo Osborn* is, as President of the Methodist Conference, roughly equivalent to Archbishop of Canterbury (though the church has no supreme authority). He lives in the North East but avidly supports Aston Villa, our opponents on Saturday. Leo may have regretted his instant agreement to be this week’s “Who are You?” guest when he saw how many questions we’d lobbed his way. We’re chuffed that he answered them anyway. Look out for his forecast of a Sunderland win and a challenge to Bill Shankly’s “life or death” quotation …

Salut! Sunderland: Up until last weekend, Villa had made a considerably better start than Sunderland. With what minimum and maximum expectations did you approach the season?

To be honest my expectations were extremely few. That is often how I feel at the beginning of each season anyway but, for reasons to which we will come, they were even less this season. Mid-table at best.

You are a Brummie living in a region where football passions run high. Have you developed soft spots for any of the North-eastern clubs?

Yes – 44 of them in the Northern League where I serve as Chaplain. Are there any others? Oh yes. Berwick Rangers!!

And of course, you’ll have heard all the complaints about Darren Bent’s apparent eagerness to get away so soon after he had professed complete loyalty to club and region. What did you make of that saga and has he, in the event, been worth the money?

Villa have mostly been at the other end of players leaving to “further their ambitions” eg Ashley Young, James Milner, Gareth Barry, Stewart Downing and many more before that. Its interesting that Young and Milner’s transfers have been generally accepted as furthering ambitions, Barry’s and Downing’s less so, not least when at the time the moves seemed to be side-ways at best and have more of a financial motive than anything lese. Darren Bent? Compared to some other transfers we got him cheap and without him I’d be writing this article on Doncaster’s web-site instead! But moving from Sunderland to Villa to “further ambitions”? Hardly especially as most of his England team mates have left! 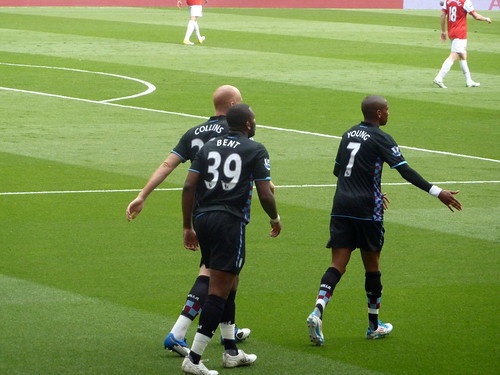 Tell me what Aston Villa means to you and whether and, if so, how you feel it has remained a proper club with proper supporters despite all the money that now swirls around the upper levels of the game.

I first watched Villa in 1959 having discovered at the age of 7 that they were formed out of a Methodist Church two miles from where I lived! So it was more than football that hooked me. Having seen them play nearly 1000 times at 60 league grounds you could say Villa are in my blood! I think in some ways Villa have kept true to their traditions – a low-profile owner, a reputation for not tapping players up (apparently!!) but realistically its all about money and success these days and despite all the jealousy associated with Man C. most Villa fans would say “yes please!”

Your duties as President of the Methodist Conference, and your geographical location, must make it difficult to be an active Villa supporter. How do you follow the club and how does this compare with the nature of your support in the past?

I haven’t lived nearer than 3½ hours away from Villa Park for 15 years now so visits are few and far between as rarely do I have a completely free Saturday so I have to content myself with games at St James, Stadium of Light, Riverside etc. When I was in my late teens I would have been mortified to miss any games home or away but have made a conscious decision that my faith and vocation should always come before my football and don’t regret that for one minute. So I make do with a subscription to the Villa programme and the fanzine Heroes and Villans and get depressed watching Football First on Sky and talking to fellow suffers!

Martin O’Neill is mentioned whenever there is talk of changes in club managership, though less so when the club in question is one of the big four or five. What is your assessment of his abilities and , in particular, what he achieved at Villa Park?

I think Martin O’Neill did an excellent job at Villa but with limited resources (although not as limited as he made out) probably took the club as far as he could. But there is no doubt he left us in the lurch and in a mess and its interesting that seemingly clubs are not queuing up to appoint him.

And what do you think about Steve Bruce, a former Blues manager of course, and the difficulties in which he has found himself?

He’s clearly having a tough time and I think being judged unfairly and prematurely. Realistically a top ten finish for Sunderland would constitute a very good season and I wouldn’t rule that out yet. Incidentally the fact that Bruce managed Birmingham is outweighed in our house by him scoring the goal that took my wife’s beloved Canaries to Wembley so he’ll always be a hero to one of us!

What are the highlights of your experience as a Villa supporter, and which moments would you prefer to forget?

The obvious answer – Rotterdam 1982! I think I always knew even then that it would never get any better than this! And it hasn’t! And yes I was there! The pre- Docherty days of the late 60s were pretty grim but with crowds of under 10,000 at least you felt you were wanted/needed! But it actually began to get better when we were relegated twice!

Who is best player you have seen, or would like to have seen, in Villa colours and, putting aside notions of goodwill top all men, are there any you feel should have been allowed nowhere near them?

Paul Mcgrath took some beating and Jerry Hitchins from a previous era but if only Brian Little hadn’t have got injured . . . . . We never seem to have bought decent players from overseas though. Two of them cost astronomical sums but never played once for us. Rumour has it that we were duped! Some would also say that signing Tony Cascarino and Emile Heskey cost us two championships!!

What are your thoughts on Sunderland: club, current and past players and supporters?

Sunderland’s fans – like Villa’s – seem both incredibly loyal and incredibly fickle at the same time! I suspect that both our expectations are still too high. But I’ve always found Sunderland fans to be knowledgeable and friendly – except for one who bashed me over the head once when I was sitting in the main stand with a Sunderland season ticket holder minding my own business! Mind you it was a wonder the same thing didn’t happen when I visited the main reception at The Stadium of Light recently looked at the “famous picture” and said: “Great you’ve got a picture of Aston Villa here but who are the other team”?! 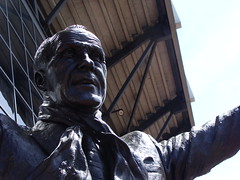 Does the tendency among many supporters, no matter what their allegiance, to treat football as akin to religion anger, disappoint or fail to trouble you?

I think saddens me more than anything because Bill Shankley was wrong. Football is less important than life and death and anything that obscures that so that we avoid asking questions that really matter about why we are here and what life really is about and where God fits in means in my view football has become a drug that diminishes rather than enhances life.

Is there something purer about non-league football – remembering that your function include the chaplaincy of the Northern League – and are there any lessons the top-flight game could usefully draw from this?

I’m not sure about purer – the foul language at non-league games particularly among players is just as bad and can more easily be heard (despite the efforts of the Northern League to stamp it out) but I think fans are valued more, can enjoy the conversation with visiting supporters without fearing for their lives, can enjoy the game, the programme and a pint or two for under a tenner and be home just after 5pm! Premier League Clubs don’t yet seem to have woken up to the fact we’re in a severe recession and if they’re not careful will price themselves out of the market. Less than 35,000 for Villa’s games against Wolves and WBA – the only people surprised were the club themselves!

Who will finish as this season’s Premier top four, in order, who will go down and who will win the major trophies?

If Sunderland or Villa did not figure in either your top four or relegated three, where do you feel each club will end the season?

How strongly do you feel the Villa v Birmingham rivalry?

Perhaps less so than when I lived in Birmingham. For me now its more important that Villa beat Magpies and Mackems! The Alex McLeish saga has been interesting though!

This was the Eduardo Question and then became the Walcott Question (in Theo’s case a recognition of his honesty in admitting he’d dived in the hope of winning a penalty) and is now the Barton Question; that covers diving and feigning injury, but what form of cheating in football most annoys you and what would you do to stamp it out?

Aggressively surrounding the referee after he’s made a decision. It’s cheating because although of course he’s not going to change that particular decision the intention is that he might give the next in their favour regardless. I’d whip out the yellow card as soon as it started.

And what one step should Aston Villa or the football authorities take to improve the lot of ordinary supporters?

Most respondents in these questionnaires put their clubs before country, in sporting terms. Would you share that sense of priorities?

Yes I’m afraid I’m club before country too! I only tend to watch England’s games when there is a Villa player on show! Mind you if England were good to watch that would help!

Sadly I can’t be at Saturday’s game as I’m on my Presidential travels in East Anglia. An excellent win and performance by Sunderland at Bolton – a dire performance and result by Villa against WBA. Players injured, suspended, on drink/drive charges and general feeling of gloom and despondency in B6. 2-0 to the home side – and don’t expect to be too richly entertained! Glad I’ll be many miles away at 4.45pm!

* The Rev Leo Osborn on Leo Osborn: I’m 59, President of the Methodist Conference for one year and Chair of the Newcastle upon Tyne District of the Methodist Church for past 10 years. A bit like an Archbishop and Bishop! Married to Charlotte for 34 years who serves as Chaplain at Newcastle International Airport.

* Show the world your support for our club – and this site – by clicking here to visit the Salut! Sunderland Shop for mugs, t-shirts, pens and bags …

8 thoughts on “Aston Villa ‘Who are You?’: Shankly was wrong about football”

Next Post
The Robson Report: killing football in ‘one foul swoop’