In the first 24 hours the voting matched the bookies, with one exception. Barnsley (the bookies’ second favourite) and Sunderland were neck and neck, each with 20% of 213 votes – a very small number by our standards, and one that allowed for a lot of leeway, given that as few as 42 people could have provided those votes: 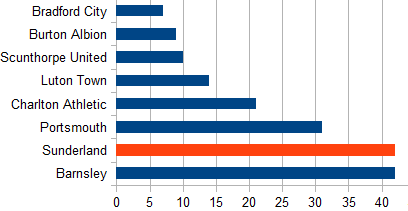 Portsmouth and Charlton weren’t doing too badly, then came Luton, Scunthorpe, Burton and Bradford City. Walsall, I might add, were the only club without any votes.

Then came that facebook  page, followed by the closing of Colin’s “gut feeling” poll, and the home club effect they brought with them.  Colin’s poll shows over 80% of Sunderland fans think we’ll go up, only 15% think we won’t.

And that’s probably why, once those fans – or some of them, moved on to this poll SAFC leaped ahead of Barnsley.

Within one day Sunderland gained about twice as many new votes as Barnsley; by day five Sunderland totaled 170 and Barnsley 95. Percentage shares of the vote had changed accordingly – from 20% each Sunderland had gone to 28% and Barnsley had dropped to 15%:

Other clubs’ shares of the vote also changed but not everyone’s share dropped. You might notice other differences between the two graphs, especially if you Support Burton Albion, Luton Town or Peterborough United.

Along with Barnsley, Portsmouth and Charlton remain fancied, and my gut feeling is that they will stay in the top six, but with only 601 votes cast (at the time of writing) a few crosses here and there have the potential to move other clubs up and down quite a lot. Even Walsall, with only 2 votes by day 5, had jumped over Rochdale who got one vote early on and then no more.

Sunderland fans, by virtue of greater numbers, have ensured their club will feature throughout the season but, realistically, this was always going to be the case. Other clubs’ fans can still do the same, though I expect the final result will be a little more impartial because of the number of choices on offer – up to six clubs per reader – and the number of clubs involved. I say a little more as I can’t guarantee total impartiality and don’t particularly want to. I’d like it if more people took part and we reached the 7,000+ votes we achieved in our Premiership days but what I get will do.

I’ve now made results visible and you can monitor changes to see how well your club is doing for the next few weeks, until our poll closes with the start of the season and the close of the transfer window. When that happens I’ll tell you what I’ll be doing with the clubs placed in the top six.

3 thoughts on “Barnsley drop, Burton and Posh replace Luton and Scunthorpe, Walsall get off the bottom in our promotion poll.”