Monsieur Salut writes: as has happened all too often, the results on Saturday showed a win for Barnsley, a draw for us. But Tuesday remains an all-important step in our attempt to climb back to the Championship. Those of us who worry about our inability to dominate lesser sides cry out for evidence that we can match – and preferably more – the better ones.

Before we welcome our Barnsley interviewee Daniel Finney*, let us offer a signpost to the prize Guess the Score competition. Find it at https://safc.blog/2019/03/guess-the-score-amid-sunderlands-wembley-euphoria-work-to-be-done-at-wycombe-and-barnsley/ . Even if you did not enter the double competition by guessing the Wycombe result as well, you may still have a go at predicting the outcome of Tuesday night’s crucial game at Oakwell.

Now to Daniel. He was one of three or four Barnsley fans who responded to our requests for a Who are You? candidate ahead of the home game. He agreed to be patient as Lucy Dawn did the honours  and now his time has come. He came up with cracking answers so it was worth waiting for … and no prizes for working out who among our players he considers too good for the third tier

Salut! Sunderland: a week or so ago, I was watching your game at Southend before ours vs Plymouth and left for the ground with all level at 0-0 only to find you’d whacked in three before the end. Just like watching Brazil all over again?

Daniel Finney: not sure Brazil play with the high intensity counter press that Stendel has instilled but its definitely has that element of free flowing/attacking football! Which at times which has seen us flourish against many of the teams in our league. Southend away was pure grit and determination, battling against the odds with 10 men for an hour – one of our stand out performances of the season.

Whatever your reply to that, more than one opposing fan has told us this season that you are the best team they have played. What have Daniel Stendel and your version of the United Nations (the ownership consortium) been getting so right?

The one thing that Barnsley have lacked over recent seasons is consistency. We have seen our best players cherry picked at reduced prices over the last few seasons and the board made it clear from the start that out goings would be kept to a minimum over the summer and in to January unless the deal was right for the club.

The assurances Daniel will have been able to take from this coming into pre-season will have been massive in terms of forward planning. This has since allowed him to really drive home how he wants the team to play, and largely stick to that system going forward 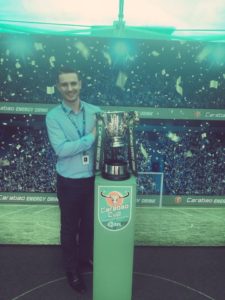 Kieffer Moore and Cauley Woodrow have been bagging goals but where are your other strengths?

It’s a cliché that goals win games however we also have conceded the fewest goals in the league. Moore and Woodrow have both been through red hot patches during the season however Ethan Pinnock has been a solid performer throughout and has been my player of the season up to this point – he will undoubtedly go onto to play at a higher level in the future

How far can Barnsley realistically hope to go?

We were tipped to finish 2nd at the start of the season and that’s where I think we’ll finish. From my point of view it is a 3 horse race for the top 2 (Luton/Barnsley/Sunderland). Promotion is the target for us whether that is automatic or via the playoffs.

What about us? What did you make of our sharp decline and this season’s progress?

It’s a strange one with Sunderland, the fan base is huge and everyone has seen the occasions of 40k+ attendances this season.

I still view Sunderland as a Premier League club and it’s a shame that their decline has been so rapid. The club look to have been mismanaged by the previous owner and poorly thrown money at managers who have only endured short tenures. The deadwood looks to have been cleaned out and the young and hungry players that are now in the team should fill the supporters with new hope. George Honeyman optimises that. A young and hungry local lad as captain – class.

Any other thoughts on Sunderland – the club, fans, Jack Ross?

Jack Ross is a bit of an unknown in English football. He was linked with Barnsley in the summer before we appointed Stendel and his reputation of developing young players on a budget up at St Mirren was a key point of interest for Barnsley.

He looks to be a man who quietly goes about his business along with Sunderland in a Checkatrade Trophy cup run and a promotion battle. Couple this up with only losing two league games. At time of writing, he/Sunderland are having a great season so far.

Your best and worst times as a Barnsley fan?

Wembley…, Wembley!, Wembley! – In that order.

Both one of the best and worst moments in our recent history was when we played Cardiff in the 2008 FA Cup Semi Final. Little old Barnsley in the FA Cup Semi Final! A fantastic achievement by all involved but an overall poor showing partnered with a Kayode Odejayi miss ultimately saw us fall short.

On the flip side our 2015-16 Promotion and Cup-winning season will definitely live long in the memory. Sunderland may be able to replicate this season and would be one for the scrap book.

In the 15 or so seasons I’ve been following Barnsley, Conor Hourihane is head and shoulders the stand out player. Leading us in the aforementioned double winning season as well as giving the ultimate parting gift of the Winner vs Leeds. Legend.

Who should have been allowed nowhere near Oakwell?

Jose Morais… Thought he was something special after being Mouriniho’s side kick at Madrid and Chelsea to name a few. Played players out of position and clearly never had a clue what he was doing, 100% sure we would have survived last season if it wasn’t for his appointment. Good riddance.

Barnsley celebs and mini-celebs include Dickie Bird (amid mild controversy after he wore a Blades scarf), Sir Michael Parkinson, Arthur Scargill and various folkies (Kate Rusby, Dave Burland, Kathryn Roberts).Who among these, or others, would mean much to supporter?

Sir Michael Parkinson would be the stand out of the above due to his personality and being an all-round decent person.

Dickie Bird has a statue in the town centre but has tarnished his reputation with the Sheffield United incident. More recently; John Stones at the heart of England’s defence at the World Cup brought great pride to the town, he’s one of our own.

Is there anyone in our squad you’d take in a heartbeat?

Easily McGeady, the few games I have watched on Sky involving Sunderland and even our game at the Stadium of Light he has looked a class above. Too good for this league.

Hand on heart, how will it pan out at the season’s end?

Honestly I think it all depends on our game at Oakwell. Whoever wins that, will finish 2nd in my opinion. Out of the two I’d have to say Barnsley due to Sunderland having a slightly harder run in, playing more away games and drawing too many games.

Diving and other forms of cheating: no longer worth bothering about since everyone’s at it, or still needs to be tackled?

Divided opinion but VAR is definitely the way forward, I can’t understand how anyone would be against a tool that would ultimately come to the right decision 99% of the time. Also retrospective bans need to be looked at. If the referee doesn’t see it or calls it incorrectly, it’s crazy that we can’t relook at it.

One step the authorities should take to make the matchday experience better for the ordinary fan?

Safe standing has been a topic for a while, each stadium will currently have a group of fans or area where supporters will currently stand up anyway so why not implement this safely? If this was confined to an area it would make it more enjoyable for those supporters and also fans (such as the elderly) to sit down and watch the game more comfortable. Win/Win

Absolutely, only missed one home game this season (Burton) due to it being rearranged whilst I was on holiday!

Promotion six-pointer but I just see us edging it by the odd goal. Barnsley 2-1 Sunderland

* Daniel Finney on himself: I’m 26, a merchandising analyst based in Leeds but living in Barnsley and playing football for a local team. Following Barnsley for 15 years, 10 of which having a season ticket. Catch me on Twitter at https://twitter.com/DanielMFinney. Hate Leeds United with a passion due to being schooled and working in West Yorkshire. An overall football enthusiast, taking in games overseas when possible including Valencia and LA Galaxy recently as well as going to the 2006 World Cup. Pleasure to help out, may the best team win!

2 thoughts on “Barnsley Who are You?: the Sunderland star who’s too good even for this match of the season”

Next Post
Sixer’s Wycombe Soapbox: a play in three acts