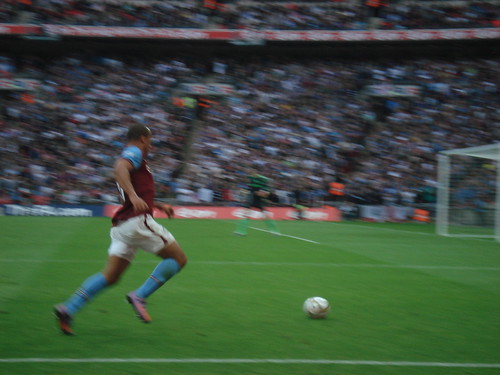 Just a spot of fun, and Nov 5 is still a few days away.

But there is a serious enough underlying message. A small prize awaits the reader who comes up with the best name for the firework that, according to the report I am about to share, seemed to send poor Gabriel Agbonlahor reeling on Saturday.

We all know what happened next. Larsson, against whom the imaginary foul was given, accused Agbonlahor of cheating but Richard Dunne headed the resulting free kick past Westwood to put Villa ahead.

Our fans have had their say. ” No angel, this Gabriel,” wrote Pete Sixsmith. “I am rapidly forming a real dislike for him based on his aptitude to tumble over whenever he feels a free kick or penalty is needed. The dive he took on Saturday was a real case of cheating. Larsson never touched him …”

Joan added: “The expression on Agbonlahor’s face gave it all away after they scored – he knew he’d ‘won’ a free kick. Odd expression, but players do see cheating as simply a part of the game.”

Lest anyone think it’s just us – a Villa fan, to be fair, posted a qualified defence of his player – let us see how the incident was viewed by a confrère in Gyanland.

This is from Kevin Affleck’s round-up of the Premier weekend for The National newspaper published in Abu Dhabi:

Well, it could also be worst gamesmanship depending on your viewpoint. The snarling Aston Villa striker does not endear himself to many fans apart from those wearing claret and blue, and he did little to improve his reputation on Saturday.

The England forward collapsed like he had been hit by a firework fired from Mario Balotelli’s bathroom under minimal contact from Sunderland’s Sebastian Larsson on Saturday.

Larsson was furious at how easily Gabriel Agbonlahor fell to the floor and with some justification as from the resulting free kick, Richard Dunne glanced Villa in front. Agbonlahor celebrated in an unedifying fashion, like a man who knew he had just pulled one over the referee. Thankfully, football justice was served minutes later when Larsson swung over the free kick that led to the equaliser.

Over to you. Fill in Kevin’s missing detail with the name of said firework, or suggest some other missile if you cannot think of one, and the best answer gets a Salut! Sunderland mug. Pipe down the cheeky so-and-so who wondered whether the second best answer might get two.

The serious point is the one made by Joan that this is precisely the sort of conduct that players have come to regard as part of the game. You almost imagine the Villa training session: Alex McLeish telling young Gabriel where, when and how to go down to best effect. Worse, you could probably change the names in the manager-player combination to a great many more.

And maybe SAFC are no more angelic than Gabriel. As Vince Richardson put it: “There was minimal contact on Agbonlahor, nowhere near enough to knock the player to the floor…outright professional cheating I am afraid, though to be fair our players do it too. Just it smarts when a goal is the direct result.”

Joan and others suggest a complete retrospective review of games, not just when a single controversial incident has been missed by the referee but picked up by television cameras. Results could not be altered, but cards might be awarded or rescinded on the evidence of the more measured view. Another SAFC supporter, in conversation after the game, said this facility was already used successfully in another sport: Aussie Rules football, he thought. Perhaps Salut! readers will know.

Salut! Sunderland has consistently badgered away about cheating in football and makes no distinction based on who the cheats play for.

If this develops from a couple of firework nominations to a proper debate on the issue, so much the better.

Some involved in (ie making pots of money from) the game may believe mountains are growing from molehills here. I urge them to look at the answers proper supporters of all clubs give to the cheating question posed in each edition of our “Who are You?” questionnaire.

And if Alex McLeish, far from congratulating Agbonlahor on the success of his ploy, has fined him a week’s wages, then he can have a mug, too.

Next Post
The Aston Villa Soapbox: must we settle for mildly entertaining?