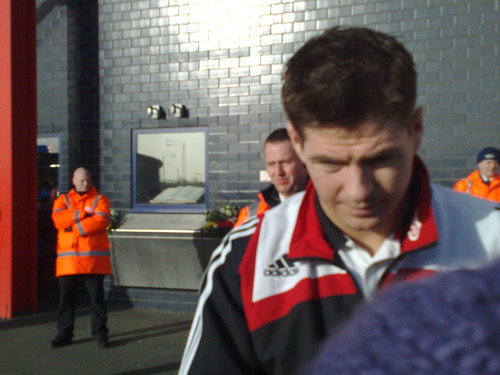 Salut! Sunderland contributors by and large speak for themselves. There is no editorial line that everyone has to follow. Differences of opinion are as likely to break out between Salut writers as between readers.

I do hope, however, that most if not all would agree with me that passing recognition should be given to Steven Gerrard on the day he wins his 100th cap for England.

It is a fabulous achievement for any footballer, to be chosen to represent his country so often. Among England players, I believe, Gerrard is only the sixth to reach this milestone, the others being Peter Shilton (125 caps), David Beckham (115), Bobby Moore (108), Bobby Charlton (106) and Billy Wright (105).

The list internationally is headed by Ahmed Hassan of Egypt with 184 follwoed by Mohamed Al Deayea (Saudi Arabia) with 178 and Claudio Suárez (Mexico) on 177. Gerrard is unlikely to trouble the record by overtaking the Egyptian but I hope he adds a few more to his 100.

Much of the discussion has centred on Gerrard’s decision to play his entire career to date in England. Liverpool-haters will have been chuffed to hear Zlatan Ibrahimovic, the Sweden and PSG striker, saying it was shame he had not moved to a bigger club. Don’t worry, Scousers; we get that sort of thing all the time.

Every football supporter has his or her own ideas on a great player’s finest moment. In the case of Gerrard, my own abiding memory is of his outstanding, driving second half performance in the 2005 Champions League final.

I was on a working visit to the French town of Brive-la-Gaillarde, in the south-west of France, and went along to a local bar with a Liverpool-supporting colleague.

His long face in the first half as the Reds went three down (they deserved even worse) was matched by gloomy long-distance communications from that disloyally Liverpool-supporting younger daughter of mine. Her texts perked up a bit later as Gerrard inspired the recovery and the impossible happened. “Impressionnant,” one of the Frenchmen in the bar kept saying.

So bravo, Steven Gerrard, top player and epitome of English grit. You’d still just about get a place in the Sunderland team and you’ve done yourself, your club and your country proud.

1 thought on “Bravo Steven Gerrard of Liverpool, England and the record books”