Now let us be honest. If Dejan Lovren had gone feet-high into Fred’s throat, leaving stud marks and threatening life itself, we can safely assume a devoted wife might have protested when the referee had the audacity to give a penalty. And a yellow card.

But it wasn’t quite like that, as we know. Fred, untouched by Lovren except when falling dramatically into him, simply cheated to gain his penalty. Since I am not prepared to suggest anything criminal, let me just repeat that this was a wretched decision, as bad as any to be imagined for the opening game of the world’s grandest sporting tournament.

Anita’s response at Instagram, brought to my attention by the 101greatgoals.com website, is as understandable as it is priceless. Great minds think alike: I have already visualised the ref in a Brazil shirt. Anita adds her critique of another of his blunders, the disallowed goal.

I did read somewhere than Michel Platini had condemned criticism of the ref, Yuichi Nishimura, as racist because he happens to be Japanese. Platini has his critics but the suggestion is so preposterous that, having made a cursory Google search in vain for the comment, I dismiss it as mischief-making (unless you know better).

And here are links to our other two pieces on Brazil 3 Croatia 1:

* Still wearing Brazil’s shirt with pride after night of fortune (or shame): https://safc.blog/2014/06/still-wearing-brazils-shirt-with-pride-after-night-of-fortune-or-shame/

And from our pals at Campo Retro: 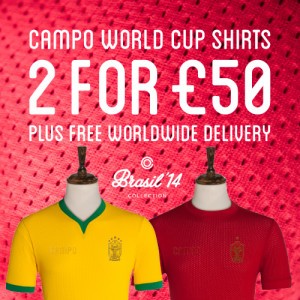 Want both but can’t decide? Get them both for £50 & get it delivered FREE anywhere in the world. http://www.camporetro.com/Shop-By-Collection/The-Brazil-14-Collection