Pete Sixsmith returned a deeply contented man to south-west Durham after seeing Sunderland win 2-0 at Bristol Rovers for the second time in 10 days. His tale of a good day out, dashed off before he headed out for yet more football (this time at Crook), is resplendent with good humour, happiness and hope …

Apologies for the late arrival of this, dear reader. Due to a combination of Bristol’s Central Library being closed, the disappearance of internet café from the streets of British towns and the reluctance of Bristol University to let me into their library to “file my copy”, I have had to wait until I arrived back at Sixsmith Towers to write this.

I was able to spend a morning in the city while my brother sorted out a problem with First Bus for his employers and I did get to mooch around Clifton and walk over the wonderful bridge that IK Brunel had built across the Avon Gorge. Pity I had to wear a hat and a hood in the driving rain.

This came after a most enjoyable night in Bristol in the company of my youngest brother who rarely goes to games now but managed to find some business to attend to so he could get to this one.

We called into Newport on the way down as he had to sort out some CCTV technology for First Bus and then drove over the newer Severn Crossing to Bristol. The hotel was found, rooms were sorted and we embarked on a stroll to The King’s Arms, reputedly the oldest pub in the city. The landlord was a Rovers fan, the drinkers followed the other lot and there was some “banter” as we quaffed a couple of pints of Wye Valley HPA, a splendid Pale Ale from an equally fine brewery. 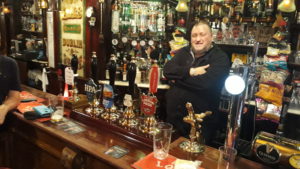 Then, brandishing my bus pass, we headed for the number 73 (appropriate and prophetic) and The Drapers Arms.

The city was busy, the bus was full and it took a good 45 minutes to get there – but get there we did and we joined a mature bunch of red and whites in this little gem of a pub. Two more pints were supped before we walked round to the ground amidst heavy rain.

We stood on the same open terrace where I had basked in the sun 10 days ago. This time, the rain was incessant and tipped itself on us throughout the game. A shame that Rovers had not thought to open stands on the opposite side of the ground which would have afforded some cover for people who would be facing a six-hour journey home after a soaking.

The game was a better one for the neutral than the league match as Rovers at least injected a bit of variety into their game. The addition of the permanently busy Stuart Sinclair improved them but they never really looked like scoring and when they did, McLaughlin was in excellent form. We attacked in numbers with McGeady and Morgan, ably supported by Matthews and O’Nien, putting pressure on the full backs and Grigg pulling the central defenders all over the place. Leadbitter and Power were comfortable in midfield with the former once again showing his outstanding qualities as he prompted and organised.

The opening goal came just before half time when Power’s excellent through ball reached Grigg and he turned his defender to place a fine shot across the keeper and into the far corner of the net. It was a well-engineered and well taken goal and it showed why Grigg will be an asset for the final run in. No longer smouldering, there is a genuine flicker of fire about him.

Two minutes into the second half, the game was over when Morgan started and finished a move. He won the ball on the edge of the Rovers box, played it to McGeady who, in turn, fed Gooch. The American, on for an injured George Honeyman, worked an opportunity and fired in a shot which Bonham saved, but the ball fell loose and Morgan reacted quickly to thump the ball into the net in front of the Pony Club Gymkhana Stand.

And that was that.

Rovers had a reasonable 20 minutes but failed to find a way past the much-improved Dunne and the very impressive Flanagan and we could have had more.

Power had a fierce shot well saved and Watmore had a couple of opportunities which he failed to take. He was also (correctly) flagged for offside when he should have let the ball go out for a corner. He may have a First Class Honours degree but…….

The rain it poured and poured but the spirits of the 1,800 supporters in a crowd of under 7,000 were not dampened. At the final whistle, there were obvious signs of pleasure and pride.

It wasn’t like Hillsborough in 73 or 92 or that extraordinary night at Old Trafford five years ago when Vito Mannone became a hero, but it gave us those two things of which we have had little for the last few years.

The players did us proud and they look like a group of men who want to play for Sunderland AFC after so many who could not have cared less.

A bus was caught back to town but it stopped a fair way from the King’s Arms – and any other part of his anatomy – and we had a wet walk through the puddles of Bristol Town before we reached our dock.

Once again, the Wye Valley HPA slipped down as we ordered jugs of it and we had a pleasant conversation with a Spurs supporter who watched Rovers when not at White Hart Lane or Wembley, and then with Paul Dobson, who arrived from another pub and immediately fell into reminiscing with Sixsmith Minimus about their days at King James I School in Bishop Auckland.

The excellent lady behind the bar produced some pancakes which she microwaved and handed out  to the customers and the night came to an end with a couple of Jameson’s before we braved the wet and returned to our respective hotels.

And that was it.

Another good, solid performance against the kind of team that we ought to dispatch without too much trouble. Wycombe on Saturday will be a tricky one and Barnsley next Tuesday will be the most important game of the season for us.

But it’s nice to get to Wembley, even on the poor relation of the cups and I am sure that the 38,979 tickets will be snapped up by genuine fans. In the meantime, we look to a fascinating end of the season with players, management and owners who have united the support and who could become real heroes in the last nine weeks of the regular season.

Next Post
Guess the Scores: amid Sunderland’s Wembley euphoria, work to be done at Wycombe and Barnsley