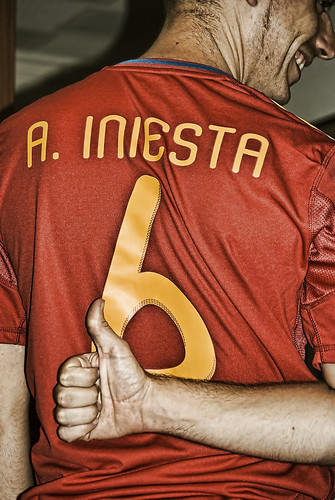 What was the headline, or one of them, on Monday morning? “Beautiful force”. Somewhere else, I saw Barcelona described as the best club football team since time began, or similar. Even our own unflappable Pete Sixsmith rattled off his post-Orwell Homage to Catalonia.

But Pete and those headline writers were hardly alone in being mesmerised by the Barca performance that clinically neutralised Manchester United – not the best United you’ve seen, but Premier champions and all that – to carry off the Champions’ League trophy. You would need to have been a United or Real Madrid supporter of the most blinkered kind not to have seen the gulf between the two sides.

There is, all the same, an alternative viewpoint.

It was offered by Mike Allcock (also known as Ols) in a thread at the Blackcats list that developed something like this:

Now that is something to aspire to!!! Simply awesome.

“I didn’t like it at all. It’s no tackle football, with plenty of diving, and it’s not my thing. I admire it. I simply don’t enjoy it.”

This is a good point which has profound consequences. It certainly isn’t the traditional British game but what Barcelona has done is develop pressing to such a level now that tacking is now tactically obsolete. No longer should we be watching our tackling simply because there’s a referee on the pitch but because it gets in the way of a far superior defensive system. In Britain we need to learn this lesson PDQ or we’ll look even more ludicrous in World Cup finals series than we currently do.

Precisely Geoff. For a team that doesn’t tackle it didn’t take them long to get the ball back when it got lost.

But that’s because they go to ground straight away and the ref whistles it up. It’s not unfair… he was doing it for the opposition too. And I do agree that pressing is 60% of it, but a lot of it is also diving. They will not compete for balls when a tackle is coming in. They go to ground. Case in point was Iniesta in the second half when Carrick caught him about a nanosecond late (and was lucky, in the terms of Barca’s game, not to get booked). He was in his own half, yet he was shaping to shoot. He could have
sidestepped the tackle, and we didn’t see a single punt from Barcelona all day yet… he was shaping to shoot? He wasn’t. They’re so trained to go to ground at the slightest contact that he basically threw himself into Carrick’s legs. He knew *exactly* what he was doing, and it takes no little skill, but it’s still trying to change the game in a way I do not like.

I don’t want to sound too negative about it; compared to the blatant cheating we saw in the Classico semis (from both sides) there was no referee baiting or trying to con in the traditional sense. Their style certainly isn’t cheating. But it is very premeditated and it’s not all down to pressing. It’s training. Any physical contact, or failing that any way you can draw physical contact and you go to ground, not making a fuss and get up as soon as the opposition are 10 yards away and play it fast, short and low. It’s clever. But it’s not my game of football. The only minor consolation I can take from it is that watching it must make the likes of Neil Ruddock and Julian Dicks physically sick, and how can that be a bad thing?

“This is a different issue to tackling though Ols. Their pressing as Geoff says makes ‘tackling’ in the way that we know it almost obsolete. They are extremely determined to get the ball back. They don’t have to lunge at players because they don’t have to. I don’t agree about them going to ground easily. I’m not sure if I’m thinking about the same incident that you are referring to about Carrick’s tacke but the one i remember he took the guy out about waist height. The whole game was for me a virtuoso display. Absolutely superb. Some of the comments you make are relevant to the Spanish national team who bored me rigid in the WC, but not Barcelona.”

See, I think you’ve fallen for the trick, Dr J. With the tackle in question (which did look bad, until you watched the replay carefully) he did catch Iniesta in the air. But only because Iniesta was about to “shoot”. He wasn’t, and it’s only because they are so accomplished that this is obvious; I can believe Kieran Richardson would have wellied it at this point, but Iniesta? He doesn’t need to. He jumped because he knew if he stayed on the turf, Carrick would have (and did) get to the ball before he did. It was a purely calculated move to get a free kick and it was repeated countless times throughout the game. This isn’t to take away from a lot of the superlative play that they did come up with, that stands on its own. Most teams wouldn’t be able to do that even if they tried. But they very much build the stage upon which they perform so well with the falling over ploy. I hated this when Chelsea tried to play this way (without the brilliance on top of it) a couple of seasons ago and I dislike it in Barcelona too.

Sir Lawrence Olivier and Liz Taylor didn’t rely on Laurel and Hardy as their opening act. When Barca can perform at this level (and again, I must stress, I do think they’re way over halfway there, it’s not all cynical) without the comedy falling over then I’ll concur. Until then, I’m going to stick with the AC Milan side of Guillit and Van Basten in the early 90s, Liverpool of the mid-80s or the pre-Lions of Lisbon Real side. All of them played mesmerising football without resorting to turf-collapsing damage control.

An utterly fascinating debate, one that goes to the heart of what Salut! Sunderland has been banging on about almost since its creation.

For the record, I had not formed an impression of systematic diving and play-acting in the final, as I certainly had while watching the first leg of the Real semi when both managers and several players thoroughly deserved to be locked up.

But I see Mike’s point and, on reflection, recall incidents – though not many – when players seemed deliberately to run into opponents’ legs or bodies. It is not beyond belief that this sort of thing is taught, quite methodically, in training. If it is, then that should also be also a locking-up offence. Fabulous players shouldn’t need to be made to look more fabulous by being taught to cheat to perfection.

Maybe the question in next season’s “‘Who Are You?” interviews – once the Eduardo Question to mark his spectacular dive vs Celtic, then the Walcott Question in honour of Theo’s honest admission and apology after diving in a match – should become the Barca Question. Or has Mike got it completely wrong? The final has been and gone, the eulogies are already part of football lore. Perhaps we should by now regard this sub-plot as no more than sangria under the bridge.

If, on the other hand, anything that appears here succeeds in focusing more thought on the diving, feigning of injury, shirt/hand-tugging, attempting to get opponents booked or sent off and all the other forms of cheating that have become part of the modern game, Salut! Sunderland will consider it has performed a minor service.

Next Post
Liverpool and Henderson: harden our hearts and make them pay