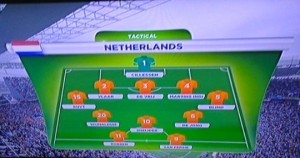 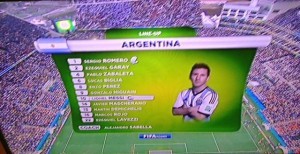 For a reason I may soon work out, this may be a shorter report than my instant account of Brazil versus Germany.

Got it! No one showed quite the same passion as the Brazilians, from hapless David Luiz down to the smallest mascot, in the national anthems. Fat lot of good that did them …

So tonight, we came back down to earth.

In place of sensational attacking play and kindergarten level defending, we had football at its tightest and most disciplined. And what an excruciating bore it was. So, the second semi decided on penalties in favour of Argentina, we are left with the modest fascination of a Europe vs South America final, hardly a prize worth waiting up for.

I tried to make allowances for the fact that Salut! Sunderland readers had, from the limited options left to them, made the Netherlands their team of choice. It was still difficult to get excited. Not quite anti-football, certainly not the Total Football of recent Netherlands history.

Even Robben, the maitre-plongeur as he might be called here in France, seemed off-colour. He did liven up just after half-time with the most unnecessary dive I have seen at Brazil 2014, having been fouled so blatantly by Martin Demichelis that the decision was hardly in doubt. Maybe Robben will reason that his histrionics at least ensured a yellow for the Argentinian defender. Bravo!

What else to record? A good free kick by Lionel Messi, comfortably and – rare in modern goalkeeping – cleanly saved, ie caught, by Cillessen. A near-miss by Higuain. Robben, inexplicably, denied service until late in the game. He did try to get his marker sent off for a second yellow, with the usual dive and squeal as he went down after Demichelis’s excellent tackle. He got a corner out of it and, a few minutes later, missed a great chance when his touch let him down.

I was moved to ask at Twitter: “Has Robben ever tried NOT diving?” Then, the rascal swerved and wriggled past two defenders, stayed on his feet – yep, I just typed those words – and nearly presented a telling cross, soon followed by a rasping long-range shot, and I decided Gus Poyet had my consent, after all, to pop over to Munich and entice him to Wearside. On a free.

Chances came in extra time, notably to Argentina. French TV showed a sly tug of a shirt by Ron Vlaar just before one of them, though it was outside the penalty area.

And so it came down to penalties. Vlaar vs Messi for the first two hardly augured well for the Netherlands, and they could not make up the resulting lost ground.

*** Our friends and competition sponsors at campotretro.com have been quick off the mark with post-semi news on their clobber. This is how they put it:

‘Germany have their place well and truly booked in the final, but who next? [they didn’t know then; we do now – Ed] Get your shirt – or any other from the stylish and timeless Brasil14 collection – for just £20 at http://www.camporetro.com/Shop-By-Collection/The-Brazil-14-Collection’