Written off prior to this fixture last season, we stunned the footballing world by romping to a 3-0 victory so comprehensively deserved it had Chelsea fans drooling about the best away performance witnessed at Stamford Bridge since time began.

What will happen this time, with our club brimming with confidence after Martin O’Neill’s P7 W5 D1 L1 F13 A6 start? In an interview that should really have been conducted over mussels and chips, washed down with strong ale, Tom Van Watermeulen*, chairman of the Belgian branch of the Chelsea supporters’ club, sees one team scoring three this time, too. Sadly, that team comes first in the scoreline and we get only one goal if his prediction proves right …

Salut! Sunderland: Chelsea: not everyone’s favourite second team and a lot of people really dislike them, while grudgingly recognising their quality. What do you think about the club’s image?

I think, this is more the image in England, like you hear the people say it is a bought team, but if you want to win trophies these days you have to buy top players to meet expectations. Over here in Belgium there is no such talking about CFC because here you have your Belgium team you support or you have your favourite in a foreign country. CFC has a very good image in Belgium and a lot of fans look up to the team and its qualities.

And following on from that question, please explain how and why someone in Belgium, with (I presume) no connection with the club or even the UK, came to choose Chelsea to support. Do friends or family criticise you for not supporting a Belgian club actively?

I had friend who invited me to join a game in London and it was CFC, this was in 1995.
I’m a supporter of Anderlecht and back in 1995 CFC played in the European cup against Club Brugge, our rivals here in Belgium. When I went with the friend to see the game, I was sold, the play of the team, the atmosphere, the kindly people, the nice trip, it was all there. Ever since I went a few time to see CFC, in 1997 Celestine Babayaro was sold from Anderlecht to CFC and then I was even more sold to see a familiar player playing there. Through the years our group of people thinking the same got bigger and bigger and, with Belgian football declining, we went more and more to England to follow our CFC. Now I run the official supporters’ club for CFC and we have 370 members. We don’t have any criticism from friends or family; they all admire us going week after week to England, sometimes twice a week (FA Cup, Champions League, Carling Cup, midweek games home and away). I still follow Anderlecht because one of my best friends, Olivier Deschacht, plays for them but only when I’m not in England for CFC.

Your mention on the list of Chelsea supporters’ club branches says you get to all home and away games. Is that still the case, do others go with you and how do you manage it?

Yes, this is still the case. We go to all games, home or away. For home games we have between 30 and 70 members, and for away between three and 10. We manage it by a very good organisation: route planning, pit stops, hotel, shuttle, tickets, parking) and the love for our CFC. Away we are fewer in number because most opponents are far away, we have to stay overnight and it usually means two days away. But I love the away trips.

Describe the matchday experience: what time you leave, how you travel, whether you stay overnight before of after and how much it all costs

Depending on the hour of kick off, we leave very early or in the morning. At the home games we make sure we are in CFC 4-5 hours prior the game so we have time to see the players arrive, go to the club shop, eat something and go to the game. Afterwards we go straight back to Belgium. Away games also depends on kick off time; when they play at noon we arrive the day before, stay overnight and after the game go back home; when they play later or in the evening we leave in the morning and stay in a hotel and go back next morning.

We always travel by coach or car through the Channel Tunnel. On away games I always drive myself and we do between 1,500 and 2,000km each away game but there’s a lot of fun during our trips; knowing we will meet up, see some players and then the game gives us an extra boost. Home games it’s a four-hour trip from home to Stamford Bridge; away, depending where we’re playing, six to eight hours each way.

What have been your high points of supporting Chelsea?

The titles we won through the years, being pictured with players, the stadiums we visit and finding so many friends supporting the same team. All that is really great. And this season my girlfriend and I went on the pitch at the home game against Wolves to give John Terry a trophy as best captain in CFC history. That was a top moment. The Europa cup final we won against Stuttgart in 1998 and the same year the super cup against Real Madrid and the league cup against Middlesbrough – three trophies in the same season. Also a very nice memory, is that Babayaro, Kezman and John Terry came to me after a game and gave me their shirts. This is the best present you can get from players, that and trophies to celebrate.

And do you have an memories of real low points?

The low point for me was the disappointment on losing the CL final in 2007/2008 against Man U with penalties. We were so strong that year, playing so well and then just one step short of the ultimate trophy.

Who is the best player you have seen in Chelsea colours, and who would you like to have seen from the past?

Dennis Wise, Damien Duff, Gianfranco Zola, Frank Lampard, John Terry. Those players play with their heart and give everything for the colours they weir. It is an honour for them to play or have played in the Chelsea colours. And their play was and is tremendous. Especially John Terry, my favorite.

The people linked with both clubs that I can think of are Ian Porterfield, Clive Walker and Emerson Thome. Do you have thought son any of them?

Only Emerson Thome I remember a bit: I believe it was ’99 or 2000 he played at CFC but he never broke through; we had very good defenders then, Desailly and Leboeuf so he was bit too light for us and we let him go to the Black Cats. We then bought Bogarde but that was a disaster. I know there was a big battle between CFC and Sunderland for an amount that had to be paid for Tome playing 50 games and Sunderland didn’t play him anymore, right (no idea! – ed). He had a lot of injuries, I believe. 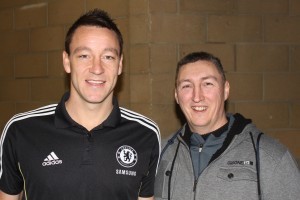 By the time you reply to this, we will know more about what, if anything, is happening to John Terry (he faces a criminal charge of using racial abuse). What do you think about the row over his alleged remarks to Anton Ferdinand?

I think that in games when the referee loses control a lot of things are said between players of all clubs over the world. Good or bad, when the game is finished they shake back hands and laugh. They forget it. One thing I know for sure is that John Terry is not the man some newspapers like to portray him. John Terry is a well known professional player and person with respect in all ways for each of his opponents. He is the first to help a teammate or player and will fight for every ball. I and all CFC fans will support John all the way and hope that the unnecessary storm calms.

Do you have thoughts on Sunderland: the club, the stadium, the fans, the region? Were you at the 3-0 game last season?

I’ve been to the Stadium of Light a few times and I like it. Not always easy to find parking – oh yes it is – ed! – but it’s OK. The people are friendly and when I wait for our bus I always meet Sunderland players and talk to your fans. Very nice stadium to be in. We don’t visit the region, but do the complete tour around the stadium and take a lot of pictures. Yes, I was present on Nov 14 2010. It was looking good at first, but after Frank Lampard missed the penalty thing went wrong (Tom!! Lampard wasn’t playing and there was no penalty- ed). Petr Cech saved us from a bigger score defeat. BUT I was also at the 7–2 win on Jan 16 the same year!

And were you surprised that Steve Bruce was ultimately judged a failure and replaced by Martin O’Neill?

Yes and no, it is common in football, that no matter what you have achieved in football, when the team is not taking points, the first guy to go is the manager. For me, it’s not always the best solution, but it seems to be normal these day. Let’s see if things will be changed in the coming six months.

Who will finish top four, in order, and who will be relegated?

The Barton Question, which used to be the Eduardo Question (and may become the Osman Question): that covers pretending to be injured to get an opponent yellow-carded or sent off, diving and, in Osman’s case, falling over your own legs and claiming. What form of cheating most irks you and how would you deal with it?

This is so irritating, players who do these thing. It is not professional or playing with the heart and the right commitment. Those kind of players should be suspended for five to 10 games. Believe me, they won’t do it again. They have television, so use the film to investigate the actions afterwards. Then players would think twice about these unsporting, unacceptable things; it is not football but cheating and does not belong on the pitch.

What is your honest view of all the money available to a few clubs in football, leading to Chelsea’s recent illustrious period and now Manchester City’s revival?

I always say you can buy all the players you want when you have the money but it doesn’t mean you will win something with it or that the players will be happy (look at Tevez, look at PSG). OK, there clubs are few, but they are are playing for all the prizes and some are out sooner then they thought. Man U, Man City out of CL. Who would say that after their buying? Basle, Napoli, no big budget and still successful, so what are you with all the money then? 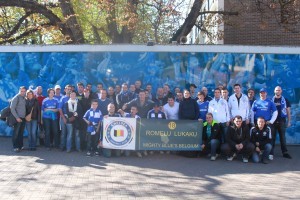 * Tom Van Watermeulen on Tom Van Watermeulen: I’m 39, the father of two children, Jordy, 12, and Jayden, two. My girlfriend, Ellen Dupont, and the kids join me as much as possible to the games of CFC. I work as a bodyguard and instructor. I’m the chairman of the official supporters’ club in Belgium, www.mightybluesbelgium.be, 370 members and still growing. We are represented at all the CFC games no matter where and when, following them in good and bad times, supporting them all the way. CFC is family to me and part of my life. I love the team and the Premier League.

3 thoughts on “The Chelsea v SAFC Who are you?: Blues from across the sea”

Next Post
Sixer’s Sentiments: farewell to Nyron and good luck at Watford