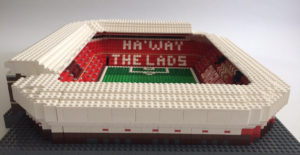 Salut! Sunderland is awash with people who have taught the nation’s young (to which may be added those, like Monsieur Salut, who proved impossible to teach). And today is a day for former pupils. Pete Sixsmith, away watching this and that in Tenby, promises one of his will be submitting  a report from last night’s 3-0 friendly win at Livingston, Jeremain Lens again scoring to remind us of what we missed and – presumably – will still have to miss.

And now, Ken Gambles delays important business in York – a few pints with friends –  to introduce someone who once sat in his classroom. The images you see are the Lego models this ex-pupil, Chris Smith, has created to depict the Stadium of Light. Let Ken briefly fill us in ….

A former pupil of mine has his own company, Brickstand, making Lego models of football grounds. 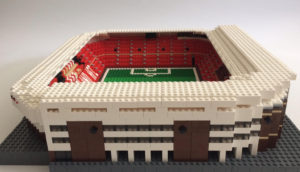 He was commissioned by Hibs to make a model of the Stadium of Light as a thank you to Sunderland for being the opposition in the recent testimonial for Lewis Stevenson.

Chris Smith (the ex-pupil behind Brickstand) is delivering the model today and he called in to show me. 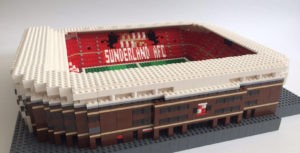 Whether the club will make anything of this is open to conjecture but Salut Sunderland can be first (or only) with the pictures.

And here’s some more from Ken about Chris …

Chris tried teaching after university but it wasn’t for him (as a retired teacher, I wonder why).
He started his company a couple of years ago and was aiming to model all 92 league grounds. So far he’s reached 42 ).
But he said this morning that given the hours it takes, and the cost of Lego, he is going to treat it purely as a hobby. He has taken a job caring for the disabled in Manchester, where he now lives.
He’s from Wetherby but is a Palace fan and has come to the SoL with his dad and me and my daughter. He even got on to the pitch for a half-time shoot-out. He wasn’t much good but at least he trod the turf.

Next Post
A daughter speaks about Jermain: missed at Sunderland, will star for Bournemouth