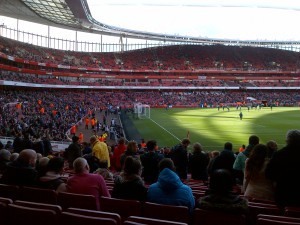 Let me share with Salut! Sunderland readers an exchange at ESPN after my report appeared there following the wretched Sunderland performance, albeit markedly improved in the second half, at the Emirates.

In a piece freely recognising Arsenal’s towering superiority on the day, I wrote this about Olivier Giroud, who was outstanding especially in the first half, scoring two and providing an exquisite final touch for Tomas Rosicky’s third:

The big French striker has his critics, but his play in that first half was everything Wenger could have hoped for. Perhaps my ears were playing tricks but I could have sworn that third goal at last inspired some singing from the sedate Emirates home crowd. Certainly, their biggest noise was reserved for the half-time appearance on the pitch — in civvies — of an Arsenal legend, Dennis Bergkamp.

One reader, Tim Mitchell, ignored my compliments to Arsenal, my admission of Sunderland’s pitiful performance and whinged thus:

I’m sure there’s a template for any article written about the Emirates ie ‘Remember to insert gratuitous snide comment on the atmosphere’ here. Well done Colin.

As a season ticket holder and someone who’s been going to see the Arsenal since 1979, a key ingredient in atmosphere is having an opponent that is (a) competing at the same level and (b) you care about beating. Neither applied to Sunderland yesterday, hence the difference in atmosphere from Wednesday, where the crowd sang all the way through to the end.

I have now replied, saying: “Shows how far up themselves some Arsenal fans have become if they are unable to take real joy in winning, and showing their superiority, and can muster enthusiasm only if being outclassed.
I presented my observations on the afternoon. Had I really wished to be snide, I would have suggested that Arsenal support is represented by the drunken louts who kept up an incessant stream of anti-Tottenham, anti-German, anti-police dirges in the queue for the Tube, all the while humoured by a man collecting for charity.”

3 thoughts on “Dozing, dozing Arsenal’s Montys and Ruperts came to life for Dennis”

Next Post
California Dreaming: forget Arsenal before the next visit to North London