Salut! Sunderland was asked, but two thirds of it was going to the match and Setanta couldn’t stump up the fare to get the other third from the south of France to London.
When the offer was relayed to members of the Blackcats list, Stephen Worthy* leapt at the chance and spent Sunday afternoon in the studio with fans of other relegation-haunted teams, including a certain Newcastle United.
Here is a blow-by-blow account from Stephen – aka Griff, a rock, motoring and former SAFC fanzine (It’s The Hope I Can’t Stand) writer – of a special way of seeing us to safety, Toon safely doon and a Mag safely home …

I’ve made some bad decisions in my time. Like the time I turned down a girl at school for a date; she went on to become a top international model.

But when the Salut! Sunderland editor put out an e-mail last week asking if someone wanted to become the Sunderland representative on a Setanta Sports News fans’ panel for the last weekend of the Premiership season, it sounded like a good gig. At first.

Yet, as the day grew closer, I started to have the kind of cold, clammy 6am premonitions that I used to have leading up to exams. Fool, Worthy, I thought. What if Sunderland do go down? And what if the Mags stay up in our place? Was the world ready for the first act of footballing hari-kari to be committed live on national television?

I was joined by supporters from the three other relegation candidates to watch feeds on a bank of TVs of all four games involving our teams, while Setanta’s plummy-accented presenter, with a name that sounds like a gentlemen’s club, Ashley House, switched to each of us in turn asking for updates and bombarding us with questions. It’s kinda like Soccer Saturday without the arrogant, know-nothing ex-footballers.

In fact, there was one footballer on the show, but I’d never call him arrogant or know-nothing. At least not to his face. That’s because it was the legendary Spurs, Chelsea and Rangers hardman, Graham Roberts. He’s still got a stare that can crack walnuts. At the start of the show, he filled me with more dread.

“I tell you who I most fear for today,” he opined, before looking towards me. “And it’s Sunderland.” The beginnings of a wry smile broke on Graham’s mouth while an icy chill shot down my neck.

Thankfully, as we now know, in this particular instance, Graham didn’t know what he was talking about either.

Very soon, it was the Newcastle fan, Ben, who was the one with his head in his hands as the near misses on Steve Harper’s goal totted up. Then Gibson scored his cracker for Man United’s Third XI and the Hull fan sat next to me, Richard, groaned audibly.

Something of a veteran of this programme, he got out a bag of wine gums and passed them around. Maybe it was an attempt to stop the gloating from across the table, where the Middlesbrough fan, Andy, and Ben the Mag sat, by occupying their gobs for a couple of minutes.

People have asked was I nervous?

If you are talking relegation then yes, although it would take until half-time, with Sunderland v Chelsea goalless, before my mood was lifted.

But I wasn’t nervous because I was on TV. The studio isn’t much bigger than an average sitting room. Besides the round table we were sitting at there were five LCD TVs and four TV cameras with autocues on, all operated remotely.

There were none of the clichéd studios of old with runners and production staff milling around.

It really was a bit like being down the pub watching the match, minus the booze.

And then Villa scored. Well, Newcastle did, didn’t they? There was little more than mild interest in the four supporters when United took the lead at Hull. But when Duff deflected Barry’ shot past Harper, we all jumped up in unison. Apart from Ben The Mag. I really was starting to feel sorry for him. No, really I was.

As the seconds ticked by like the timing device on a 100lb bomb ready to explode in two of our faces, the Boro and Mag fans became, respectively, increasingly resigned and animated. 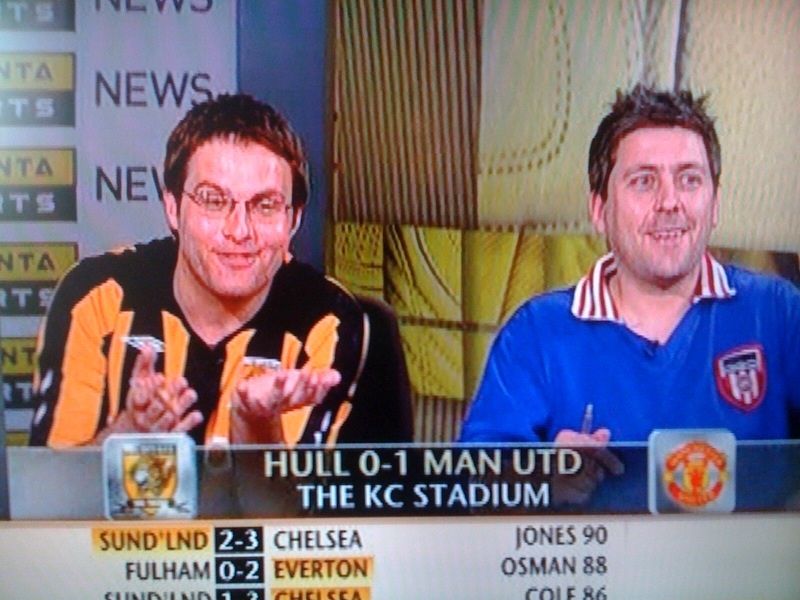 I was getting plenty of air time because of the five goals in our match and had Graham Roberts agreeing with me about Ricky Sbragia’s lack of charisma and motivational powers. At one point he suggested it was time for me to open the champagne. Pity. I was driving home later.

With 10 minutes to go, and despite a late Newcastle rally, it had become clear that none of the four teams were going to draw, let alone win.

Ben was trying to avoid my gaze at all costs. Andy had long given up of a Boro revival and was wearing the smile of the condemned man who knows the trapdoor is about to open. I started to formulate my thoughts, especially about the Toon’s demise, ready to unleash them in the final summary.

As it turned out, I didn’t need to air them. One by one, the four games fizzled out. It was a bit like being in a bookies when the final whistle sounded at Villa and Upton Park.

Cries of “Get in!” and “Come on!” mixed with whimpers of distress, shoulder-shrugging and ripping up of paper.

Andy, the Boro fan, put his hand on Ben’s shoulder and then launched into an anti-Newcastle tirade that any Sunderland fan would have been proud of. “For years we’ve had to put up with that lot up the road telling us how massive they are, how much better they are than us. Well, good riddance…”

“I’d like to add my commiserations to Newcastle United and its fans,” I added at this point.

“You’d like to,” interjected Ashley (House, not Mike), knowing where I was going with this, “but you can’t, right?”

Spot on, of course. Ben The Mag was ashen-faced and was facing a three-hour train journey back home to Newcastle after watching his team relegated. In London. On TV. Could anything get worse?

Well, how about, as he stood waiting for a taxi on the Gray’s Inn Road to take him to King’s Cross, if a car pulled up alongside him? And in that car was a bloke in a Gary Rowell Hat-Trick At St James’ Park replica shirt, offering him a lift? And how about if the car was a convertible so everyone could see us in our shirts, although one of us wanted to just hide?

Come on, it was the least I could do. As Ben jumped out at the station, he left his wallet on the passenger seat. If I was really evil, I could have driven off with it. But I called him back. He’d been through enough.

“Safe journey back, Ben. See you in a couple of seasons, eh? Maybe…”

Just when I thought the day couldn’t get any better, I have some highly amusing news from the day. Graham Roberts was unable to shake hands with his right so I asked why and he told me he had been in a Spurs v Chelsea Old Boys charity boxing match on the Friday night, and that he’d injured it in a bout with Kerry Dixon. I asked if David Speedie – along with Jimmy Hill, arguably a Sunderland fan’s primary bête noire – was involved. He was – and had been rushed to hospital with several broken ribs after a bashing from Spurs’ Steve Sedgeley. Further proof that somebody up there really loves us.

*The griff on Stephen Worthy Fifth-generation Sunderland fan, despite the fact that his grandfather grew up in Southampton and that, like his father, he was born and brought up in Surrey. He remembers regular stays at his auntie’s in Seaburn when he went up to home games and walking on the beach in the snow with an incredulous West Ham-supporting mate before a game at Roker Park against the Hammers in 1993. His fave moments watching the Lads include being part of a crowd of 48,000 at Sunderland’s promotion winning victory in 1980 (also over West Ham) as a 10-year-old and losing his voice for two days after standing on the Kop at Hillsborough during the FA Cup semi-final win over Norwich in 1992. He has been a journalist for 16 years. He once wrote for the top kids’ football mag Match and the late, lamented Sunderland fanzine It’s The Hope I Can’t Stand and now writes each month about motoring for Car magazine and about music for titles including Mojo, NME and The Guardian. He and his wife Lara have a 15-week-old son, Raffi, who will be indoctrinated in the ways of red & white at the earliest opportunity.

2 thoughts on “Fan-tastic day: how to try not to gloat on national TV”