Nicole Kidman does not support Sunderland. But I shamelessly dragged her into the story of Dr Feelgood’s lead singer, ROBERT KANE, who does. 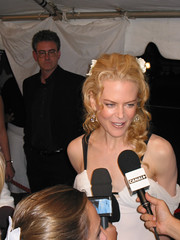 Want to know about me and Sunderland?
Picture: Torontoboy

As Dr Feelgood left the stage at Newcastle Opera House, one more treat lay in store for the cheering fans. “Robert has something he’d like to show you,” the compere, John Otway, told them.
With one bound, Robert Kane was back. Only this time he was wearing a Sunderland top. In that instant, he went so completely from hero to villain that the Hamsters, due on next, feared the booing was for them.
“One of their guys was setting up his kit, and couldn’t believe what he was hearing,” says the Feelgood frontman.
Looking back, Robert can see why the crowd seemed cross. The concert was on Dec 7, 2000. Three weeks earlier, our lot had descended from the clouds (officially known as the St James’ Park away end) with “two” and “one”, in that order, on their lips.
“But I only did it for a laugh, thinking it would be taken in that spirit,” he insists. “How wrong I was. I just took a bow and walked off.”
Born in Brandling Street, in the shadow of Roker Park, Robert Kane is living testimony to the notion that being Sunderland Till I Die takes many forms. He talks with real passion about the Lads, knows all the arguments about what has been going wrong and hopes as fervently as anyone for a quick turnaround.
Yet Robert has never set foot in the Stadium of Light for a league match. He was in his teens when last a regular at Roker Park. “Then,” he says, “girls and music took over and I became an armchair supporter.”
But he did spend much of his boyhood watching the likes of Monty, Charlie Hurley and Cloughie. “One of my earliest memories is of looking out of the window on Saturdays and seeing hordes of people going down the street to the match. A friend of my mother took me to my first game. I’ll never forget going through the turnstiles into darkness, then up into the light and seeing this immense stadium and the green of the pitch. It was fantastic, an image that will always stay with me, though I haven’t a clue what the match was.” 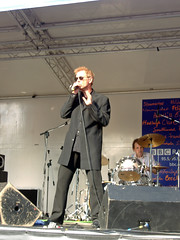 Robert Kane, without that top
Photograph: Running in Suffolk.

When he was old enough to go on his own, he would help out in his grandfather’s betting shop for half a crown. It got him into the boys’ enclosure, a halftime pie or Bovril and the fare home to Whitburn, where the family had moved.
“I went week in, week out,” he says. “First team one Saturday, reserves the next..”
Strangely, he cannot recall ever using his vocal gifts on the Roker End. But he has made the most of them in the 30 years since rock ‘n roll shifted his priorities forever.
His first real band was the Showbiz Kids, named after a Steely Dan song. They also did one or two Feelgood numbers, notably Milk and Alcohol, and stuck at it for five years.

Then there was Well Well Well. Who? Unluckiest band ever. “Wet Wet Wet turned up with their first hit just as we were recording our debut album, Dangerous Dreams. We bombed in spectacular fashion.”

Next Robert joined the Alligators which evolved into the Animals II, including two founder-members, John Steel and Hilton Valentine.
One gig took them to Muscat. During the soundcheck, Robert spotted a familiar face. “Is that Mr Porterfield?” he called out as our 1973 Cup Final scorer, then coaching the Omani national team, walked past the open-air stage. “I told him I was from Sunderland and he understood.”
The Animals II stint ended when the call came from Dr Feelgood, who had struggled to replace the face and original voice of the band, Lee Brilleaux, killed by cancer in 1994. For an idea of the scale of challenge, consider the pressure that will be felt by the next-but-one striker after Kevin Phillips, especially if SuperKev’s immediate successor doesn’t exactly set the place alight.
“Absolutely no regrets, though,” saya Robert. “I’m having a great time, even if I would like to get home a bit more often.”
On Robert’s first night with the band, in France on August 14, 1999, the ex-Clash star Joe Strummer, a Chelsea supporter, was also on the bill. Think back. A week earlier, we had returned in glory to the Premiership only to be thumped 4-0 at Stamford Bridge. Time to redress the balance. “Je suis un Sunderland fan,” Robert yelled as Strummer looked on from the wings.
And was the audience impressed? “Um, no. It was a bikers’ festival, 20,000 of them all p—ed or stoned out of their heads. It meant nothing to them.”
So is Robert any good? For an expert view, I turned to a confirmed Feelgood fan, my (then) Telegraph colleague Charles Spencer, the world’s best-known drama critic since he invented the phrase “pure theatrical Viagra” to describe Nicole Kidman nude on the London stage.
Charlie saw the band live, and had such a good time that he regretted, as a recovering alcoholic, that he couldn’t drink:

“Kane was terrific: about 20 years younger than the rest, I’d guess, and a lithe, predatory stage presence. He stalks around like a taller Jagger, sporting shades and a black frock coat. He also blows a mean harp. There’s a touch of Eric Burdon, though not quite the same grit, but he really energises a group that would seem static, exceptionally portly and middle-aged without him. The band’s playing as well as ever, though, and I loved every minute. Just wished I had the booze to go with it.”

Robert – at 47, he is actually “second oldest in the band”, but running and yoga keeps him fit – should clock up his 500th Feelgood appearance this year. Between tours, he goes home to Sunderland, where his wife, Lynne, works in a health centre. His son, Luke, 15, is more into rugby than football, though Laura, 18, a York University student, has had part-time work at the SoL.
When we first spoke, Robert talked of the luck he has had in life. “It’s amazing. I grew up watching the Animals on TV as a kid, did Feelgood stuff in a band and ended up in both.”
When I called again on New Year’s Eve, his luck had changed. “I’m going to the West Brom game,” he said.
* Robert did go to the game – and saw West Brom knock Sunderland out of the FA Cup. Remember that ages, situations etc have changed – and poor Joe Strummer has died. This is essentially how the article appeared in Wear Down South.

3 thoughts on “Feeling good about Sunderland”