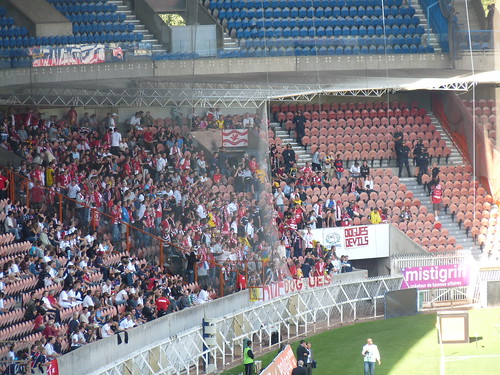 VOTE FOR SALUT! SUNDERLAND IN THE EPL CLUB BLOG AWARDS BY CLICKING HERE

The sports minister Chantal Jouanno said the debate – secretly recorded and handed by a disaffected official to a news website – proceeded in a manner that left an impression that was “really very unpleasant, with innuendoes that very often were borderline tending toward racist”. But Blanc, who was attacked by some former World Cup colleagues but defended by others, Zizou crucially among them, had not spoken in favour of quotas and had stated: “If there are only blacks in the training centres and these blacks are French and want to play in the France team that is all fine by me.”

My full account of yesterday’s events is in today’s edition of The National. I’ll not even mention the other time Blanc said things he ought not to have done; nor will I necessarily agree with my former colleague Sam Wallace, who wrote in the Indie that whether or not his comments betrayed racist thoughts, Blanc was guilty of “sheer stupidity”.

But the French manager did speak in a way he has now admitted could be misinterpreted, though he claims the offending words were taken out of context. He is said to be angry with himself. Blaquart, despite being prominent in an anticracist sports body, could still face dismissal by the FFF. We may not have heard the last of it.

Next Post
Sulley Muntari, Inter Milan and us: I am the greatest, or not