We promised Fulham’s man of money in this week’s “Who are You?” slot, and while Steve Johnson* may not be Mohamed as Fayed, or have quite his fortune, he does work in money. He’s also a passionate Fulham fan with some great answers to our questions ahead of Fulham v Sunderland this Saturday. Sadly no photo – so we’ve just had to make do again with his club’s celebrity supporter Lily Allen, who we’re sure really, really wants to do this feature herself of only she can break free from the tyrants who do her PR …

Mohamed al Fayed: a good thing for Fulham FC or do you have reservations? Where would you be now without the support he’s given?

When “Mo” put his hand in his pocket in 1997 the club had just gone through the lowest point in its history. I must admit there was some nervousness about him initially but he put a lot of money into the grass roots of the club and it was clear he was in for the whole journey. The rest is history, as they say on the pitch, although not keen on the dodgy shirts and the occasional dodgy guest – Michael Jackson and Maradona !! Where would we be without him – probably Ryman Premier League!!

Was Mark Hughes a smart appointment and how do you feel he is measuring up?

I think we were all still on a high in the summer after Hamburg, and the thought of getting Martin Jol from Ajax was very appealing. So Hughes did feel a bit like sloppy seconds in the end and to follow “Woy” was always going to be very hard. The jury is still out, but the general level of play is actually better than last year with a bit more going forward. I always thought that he was abit of a post match moaner but he seems to have chilled a bit. Word from the training ground is that the players respect him so happy to keep the faith! ps We may all hate Mr Jol soon!!!! (what? as Alan Pardew’s no 2? – ed)

So far lots of draws, some good results and that hammering at home to Man City. What were your minimum and maximum expectations at the start of the season?

Should I say Champions League or Championship? take anything for granted here, would love to have another European Tour but would have hoped for top 10 at least.

Do you feel moral ascendancy supporting Fulham instead of Chelsea, and how will it be in terms of local rivalries if QPR turn money into serious success?

I live, work and drink around Chelscum fans that are continually trying to be friendly and tell me how they “like” Fulham. When are they going to realise I hate them with a passion? I spent most of the summer being wined and dined by fans of all different clubs on the back of our Europa Cup exploits. How often were they congratulated on their double ? The rivalry with Chelsea is actually a bit soft – now QPR is more of a physical thing. If we are alongside each other next year watch this space. There is also a bit of needle with Brentford that goes back to our really dark days. 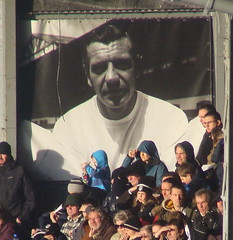 Who are the best players you have seen in Fulham colours, do you have handed-down thoughts/anecdotes on Johnny Haynes and other giants of the past?

Never saw the best No 10 play but by all accounts a true legend. My support goes back to around 1972 and I was very fortunate to see Mullery and Moore get us to the Cup Final in 75 and then enjoy the madness of Best and Marsh just a few years later. I worked in an office of the bank at that time where we controlled the accounts for Fulham FC. To say the least it was a week to week existence, but luckily our senior manager was a huge Fulham fan and I am sure he kept the club alive more than once. I was privileged enough to meet George Best at a lunch a true gent. In terms of more recent heroes – Les Barrett (sublime 70s winger), Gordon Davies, Roger Brown, John Collins , Simon Morgan and Brian McBride. Most of these just always did it for the shirt !

And which players should never have been allowed anywhere near Fulham colours?

I am very easily pleased when somebody puts on the Black and White colours but without a doubt the worst signing was Steve Marlet £11.5m. What was Mo thinking about, and we got done for not paying the agent his fee or something like that. Talk about salt in the wound. Apart from that the only other name that comes to mind is the worlds biggest (being kind) goalkeeper Jim Stannard who would always have at least three showings in every Own Goals and Gaffes Video that Danny Baker released.

And thoughts on Sunderland: the club, the city, the fans?

Sad to say that in all my travels I have never visited Roker or Stadium of Light. In fact I seem to view Sunderland as a club that we play twice every year, generally share the points, and everyone goes home happy. Have met quite a few of your fans at the Cottage over the years and always good for banter and support. We have shared some good players down the years Vic Halom, Lee Clark, Paul Bracewell and of course you now enjoy the silky Steeeeeeeed!! Such a shame he left here on such bad terms a truly gifted player who gave us some great moments.

You’ve travelled a bit watching Fulham. Do you rub shoulders with Lily Allen and other celebrity fans? Describe any memorable moments.

Like all clubs we have a few celebs and actually Keith Allen is someone I have met. Pleased to see he has brought his kids up properly. To be honest I don’t think the likes of Hugh Grant and Honor Blackman drink in the same establishments as me. Mind you I am surprised I didn’t bump into Hugh in the Red Light part of Hamburg last year ! The big celeb fan this year is Example – rapper – I guess he was too busy for this gig!!

Name this season’s top four in order, and the bottom three. Where will our two clubs finish, in not in either list (!)?

Is is time to abandon high-minded principles about cheating – diving, feigning injury, haranguing referees to get opponents booked or sent off – and accept it as part of the modern game? if not, how do we stamp it out?

The modern player is only doing what he can get away with. This is a game that loves talking points and it would be wrong to try and desensitise it totally. If you want to stop something then hit the players where it hurts ie lengthy bans. Grow up everybody, it is not a perfect world.

What did you make of the World Cup 2010 and what thoughts do you have on the outcome of the Fifa vote of 2018?

Each one disappoints more than the one before.That is not a reference to England. It was not much fun watching with the sound turned down. The final itself was a fitting epitaph. I think that not getting the 2018 World Cup was probably a blessing in disguise. Our FA is the laughing stock of the world and until the running of football here is sorted then forget it. Fifa is a gentlemen’s club and we are wearing jeans and making noise !!

Sadly not my turn this year. Both sides to score 2-1 to the Mighty Whites !

* Steve Johnson on Steve Johnson; Private Banking Manager for a high street bank. Followed Fulham for 37 years the ups and downs and running arounds ! Who would have thought that we would get to a European Final, not me as I decided to go to the very first game in Lithuania just in case that was it ! Mind you glad I did lovely scenery ! Sadly no pics !! My club have been my longest relationship in life they never ask me where I have been or if I have had a drink. I wish I could marry them!

4 thoughts on “Fulham v SAFC: Fayed, pictures of Lily, praise for our Steeeeeed”