Arsenal fans** will probably not care a hoot, but this part of Salut! Sunderland hopes they have a championship to toast at the end of the season. As for us, the next few games, mostly at home, will define our season, admits Steve Bruce. In how many recent years have we heard a similar refrain? Is it time for Sunderland AFC – and perhaps especially Niall Quinn – to realise the extent to which our collective patience is being tested? …

Whatever they are not, Sunderland fans are realists.

No one looked at the arrival of Ellis Short as owner, or Steve Bruce as manager, and thought: “That’s it. A top four place is there for the taking. This season.”

When Mr Short set a top 10 finish as his target for 2009/2010, and made available large sums of money for Bruce to spend, that seemed reasonable.

As a group of, shall we say, mature SAFC supporters sat down to dinner in a modest London Italian restaurant after the inevitable defeat at the Emirates, there was no talk of the top four, of course. And nor did anyone mention a top 10 finish.

We didn’t even spend much time debating whether Cana or Fabregas or both should have been sent off had Steve Bennett been doing his job properly. But we did discuss that apparent pre-requisite of being a Sunderland fan: the fear of relegation, at least in seasons when we are not piushing for promotion, and the certainty of disappointment.

Yet we thought we’d finally got past the certainty of disappointment that most of us who have supported the club for upwards of 30/40/50 years came to regard as a natural condition. We’d voted Niall/Ellis/Steve and inhaled. Only to be dumped straight down again with February still unfinished.

That we should have reached this state of affairs is little short of an outrage. For all the investment, all the hope and ambition and all the passion and commitment of the fans, we are once more fighting for our lives at the wrong end of the top flight, above the relegation zone only because of Darren Bent’s goals and the inadequacies of our relegation rivals.

Steve Bruce still has Salut! Sunderland‘s support, but that is mainly because it seems the wrong time to make dramatic changes and expect someone else to get his – Steve’s – squad out of trouble.

But if we pick up a lot of points from the forthcoming string of home games and move clear or nearly clear of danger, that will be a reason for relief rather than celebration. I would not be satisfied without such a strong back end of the season that we could look towards August with another burst of irrational optimism.

Football clubs have a way of being somewhat disdainful about the view of ordinary supporters, especially when ordinary supporters choose to give themselves an unofficial but above-the-parapet platform. Niall Quinn, at least, has risen above that approach, in terms of his accessibility to fans.

He needs, all the same, to take heed of the sort of things being said by long-standing, long-suffering and increasingly disillusioned followers of Sunderland AFC.

Consider these comments, taken on Saturday night from the Blackcats list ( a forum to which fans in the UK but also all over the world belong, and where the quality of debate is invariably high):

* First time in ages I’ve plucked up the courage to look at the Premier League table. To my utter amazement we aren’t bottom. I’m still not getting my hopes up though. I’ve allowed this club to dominate my psychological well-being for far too long. This season is just a step too far. The straw that’s broken the camel’s back.”


* Your comments just sum up how I feel as well. I went out to look for bathroom tiles with my wife rather than watch the second half and I didn’t even bother to check the final score.

* Know how you feel, I avoided the game for 25 minutes but sadly I got sucked in again. I think the Premiership in general has been utter garbage this season. So many poor teams, poor games and crap refereeing. I also think it’s pretty clear that Bruce is not going to change our fortunes. I’m not saying he should get sacked tomorrow but if we are looking to progress he’s not the man to do it. Another average manager and I’m starting to get annoyed every time I look at his ugly face. I heard today that we want to buy Marc Wilson from Pompey if they are allowed to sell to ease their problems. Another defender, as if we need another one of those.

It has been worse: some of you will recall this comment, quoted in a recent posting: “What the f*** is the matter with this football club that regardless of players, managers and owners we are perpetual dog w***?”

If Salut! Sunderland can be presumptious and address Niall Quinn, these, Mr Chairman, are the views that should be of enormous concern to you. I have heard similar thoughts from several others.

That London dinner was not totally gloomy, but only because the women present refused to allow the conversation to be dominated by the crisis afflicting our club.

But the men would not be silenced altogether, and talk turned to acquaintances who had been utterly passionate fans of this or that club but suddenly took the decision to break free. It can be done, Niall.

“You know, I really thought that this time it was going to different,” said one of our crowd. “But it begins to make you think whether it’s not time to get a life.” 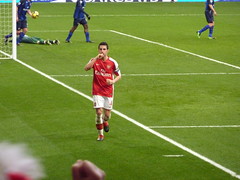 * With thanks to Peadar O’Sullivan for the Niall photo and to “Wonker” for another slice of his Flickr pie, this time capturing the moment we knew we were beaten 2-0 at the Emirates and not deluding ourselves about a stoppage time equaliser.

** And thanks to all the Gooners who have been this way in recent days, whether to engage in pre and post-match banter or to see what Fatima al Shamsi and Chris Borg had to say about their Arsenal passions.

12 thoughts on “Gloom descends over the post-Arsenal dinner party”

Next Post
Soapbox: Bennett the bottler (ask any Arsenal or SAFC fan)