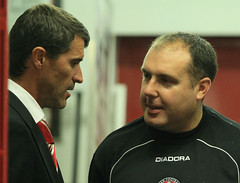 A little while ago, Shane Breslin asked me to write an article for the Irish football website, eleven-a-side.com, of which he is the editor*. Here he returns the favour……

Spurred on by almost blanket coverage in the mass media, Irish interest in the Sunderland story is holding its own against the climax of the Gaelic games season. But whether there will be any longevity to the dalliance remains to be seen.

Last weekend, approximately 110,000 supporters – or, if you will, about wo per cent of the island’s population – turned up at Croke Park as the All-Ireland football and hurling championships reached the knock-out stages. This Saturday and Sunday, with the Dublin hordes snaffling up tickets for their football quarter-final against Derry, that figure should reach 140,000.

But far from being drowned in the swirling rapids of the GAA’s season-end, the Sunderland experience is doing rather more than hanging in there, with whole pages of national broadsheets devoted to it.

Saturday’s Irish Times tried to tap into the growing interest in the Black Cats – I hesitate to call it “support”, in the true sense of the word – by kicking off a weekly column, A Year on the Wear, from the North East based journalist Michael Walker.

Listing the football club as the city’s last citadel of identity since the demise of the mines and the shipbuilding, it read like an introduction to the history of Sunderland. Necessary it was too, for many new Irish fans might have struggled to point it out on a map of the United Kingdom 12 months ago. A little history might illuminate their enjoyment of the day trip.

It was these “Paddy Come Latelys”, as the subheading went, who found themselves on the wrong end of a bashing in a back-page Sunday Independent editorial.

Eamonn Sweeney, who attended his first Sligo Rovers game two days before his birth in 1968, railed against the “sunshine supporters” who have forsaken the Irish game.

At Dalymount Park, where Sunderland met Bohemians last week, one side of the ground regularly left empty for quotidian fare was reduced to standing-room only. Bohs, Cork City and Galway United attracted their biggest attendances of the year for the friendlies, something which grates on the devotees of the domestic game.

“If you’re one of the people whose only sight of an eircom League ground comes when an English team visits, shame on you,” wrote Sweeney. “You can’t consider yourself a genuine fan unless you make an effort to support the domestic game. It is, after all, where Roy Keane got his start.”

League of Ireland grounds were regularly packed to the rafters in the 1950s and 1960s, before the spread of the televisual medium and the advent of live football drew the public’s attention elsewhere.

Should the “sold-out” signs go up around the Stadium of Light on Saturday, the 48,000 attendance on Wearside will be similar to the sum total of patrons at all eleven eircom League games this weekend.

But just who are the Paddy Come Latelys? Make an early morning departure from Dublin or Cork airport and you will notice hundreds of replica shirts making the pilgrimage to Old Trafford or Anfield or Parkhead; none of them will have jumped ship to join Roy Keane’s crew. The eircom League’s fanbase, for all its numerical shortcomings, is a committed one.

The success of the Keane/Niall Quinn axis, and the Irish money which has catapulted the club back to the big league over the past year, is that it has attracted supporters from outside the traditional soccer fraternity.

Many of them are primarily supporters of Gaelic games. I know of one new season ticket holder who is delighted that Sunderland’s opening game against Spurs falls between Meath’s All-Ireland quarter-final and semi-final dates. He will get the best of both worlds on three successive weekends.

Irish sports fans, weaned on the you-can-win-them-all mentality of the Celtic Tiger, love to ally themselves with success, whether it is Ireland’s rise from Six Nations also-rans to one of the contenders for this autumn’s rugby World Cup in France or Munster’s journey to the Heineken Cup. Rugby, for so long a minority sport, is the new bourgeoisie, a byword for material success.

The idea of true support, however, and all the peaks and valleys it entails, is an alien concept.

And that will be the litmus test of Sunderland’s new-found fanbase on this side of the Irish Sea. With the PR machine overheating and a summer recruitment drive taking the expenditure past the £20m mark, expectations are high.

A season of struggle and the thousands of Irish fans who purchased season tickets this summer might think twice about renewing their subscription.

* Thanks to the Ready to Go subscriber who spotted the glaring garble (duplication of a couple of words) in my original introduction – of all days at just the time a lot of fans were coming this way from a link at that site. I have said it before, and say it again: it was a dreadful mistake to give direct input to reporters, who were always accustomed to having their errors spotted by sub-editors

2 thoughts on “Great Gaels sweep new support our way; but will it last?”