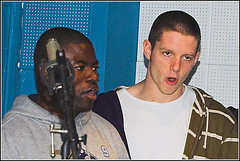 That’s our man on the right
Picture:Jibba Jabba

Tasmin Archer fans will just have to wait a little. Salut! Sunderland feels duty bound to extend a warm welcome to Greg Halford, Roy Keane’s first summer signing and one that fills the heart with hope.

He’s 22, stands 6ft 5in and cost our moneyed Irish friends £3m from Reading. But he will be remembered by many at the Stadium of Light for his excellent performance in Colchester’s colours against us last season.

As a right back, he fits a slot vacated by the return to Man Utd of Danny Simpson and represents a great start to the team strengthening we all knew was necessary if we are to re-establish ourselves in the Premiership.

There is room for improvement in most areas, but Keano is sensible to start at the back – though a glace at Halford’s record shows he is a useful goalcorer, too.

The rumour mill is working overtime – frankly I’d be disappointed otherwise – and we have been linked with any number of other players.

Two strikers who each made an impact last season, Preston’s David Nugent and David Healy of Leeds, are among our supposed targets (Nugent is reportedly the subject of a bid worth £6m plus or including Stern John, with PNE holding out for Stephen Elliott instead).

If we do go for Nugent, I think we have to be honest and say that while John made some striking contributions to the promotion campaign, and Elliott has always seemed a player of great potential, we could afford to let either go. John could not expect to be more than squad player in the Premiership while Elliott has struggled against injuries and may benefit from a new challenge elsewhere.

For now, though, let’s quietly applaud Keane’s first positive act of the close season and wait, with some excitement, for further announcements.

1 thought on “Halford’s on his bike, coming our way”