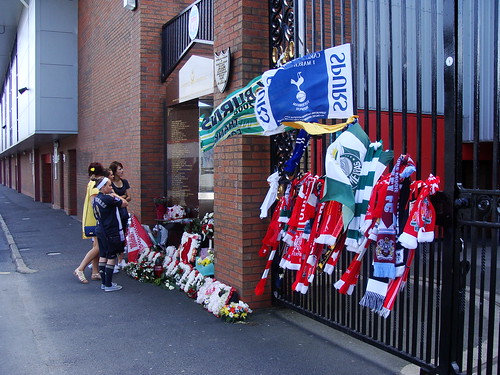 In his moving words here yesterday on the long-delayed vindication of Liverpool supporters caught in the horror of Hillsborough 1989, Jeremy Robson mentioned being at one non-Sunderland game that afternoon as news of the disaster spread and thinking instantly of a close friend who was another, the Liverpool-Notts Forest FA Cup semi-final. That friend was Mick Goulding and this, reproduced with his consent from the Blackcats email list, is how Mick recalls an avoidable tragedy and the systematic distortion of the reasons it occurred …

I’ve spoken a few times on this list about Hillsborough – most recently because it was still being claimed here (20 odd years after the event) that “it wouldn’t have happened if the fans hadn’t been pushing” etc.

That this is still a common misconception, even among people who frequent games and know about football, speaks volumes about how the damage created by lies and distortion has ingrained itself into everyone’s consciousness.

People have been prepared to believe the picture painted by the establishment even when eye-witnesses have contradicted it – because they can’t believe that the establishment could have lied and distorted reality in such a way, or been so cruel and heartless towards the families of the 96 dead.

Everyone who was there has always known the truth, and so has everyone else who has lent any kind of a sympathetic ear. It shouldn’t have taken 23 years – during which official enquiries, inquests etc have glossed over what happened – to come to the realisation that all you needed to do to get at the truth was give it the time, the patience and the willingness to want to look for it among the evidence which has always been there. That’s the real and shocking disgrace which the establishment needs to answer for.

The police have always been guilty of serious mismanagement on the day. That much was obvious to everyone. But the cover-up, the tampering with evidence, the encouragement of malicious falsehood, is a disgrace beyond belief.

It’s also both amazing and shocking, in this country in this day and age, that a coroner’s inquest could base its verdict on an assumption that everyone could be declared dead by a certain time, when there is forensic evidence that many were still alive beyond that time. This leaves us with the proposition, almost as tragic as the original event, that people died who could still have been saved had it not been for the incompetence and mismanagement of the emergency services. Even though there’s been a victory for the families today, this is a new horror that some of them will now have to face. Closure, even after 23 years, is still not assured.

The image which has stayed with me ever since I stood and watched it enfold is of the fans themselves – the real heroes on the day – who worked to help people and who tirelessly ferried bodies, alive and dead, across the pitch, self-motivated and unaided by those whose job it was. Finally they’ve been vindicated, and that is a real victory for the truth.

The Leppings Lane End at Hillsborough was quite literally a death trap. It was badly designed and, by its very nature, led directly to fans crushing into the central pens behind the goal. For that reason – and the fact that no stewards or police did anything about it – the stadium itself is guilty.

I couldn’t begin to count the number of times I’ve had to explain to people that the exact same thing had happened in the exact same fixture the year before – albeit without the same consequences. I was at that game as well, and there had been a crush in the central pens, which was only alleviated by fans pulling people up into the seats above.

It now turns out that the stadium did not have a safety certificate and that there were known problems going back to (at least) 1981.

Yet the FA continued to use it and were oblivious, or uncaring, towards anything to do with the fans or their safety. It begs the question as to what extent the FA should now share some of the blame? It seems to me, as an ordinary match-goer, that the football establishment is still colluding with the police in treating football fans like animals – and we are still being denied some of the civil rights which everyone else takes for granted.

So, it’s a bitter-sweet victory, and it may not be over yet. There may well be criminal prosecutions to come out of this, and then maybe there will finally be justice for the 96.

* Mick Goulding, lifelong Sunderland supporter and occasional contributor to this site, worked for 40 years for the Open University before retiring.

3 thoughts on “Hillsborough: truths that were always known, a victory that remains bitter-sweet”

Next Post
The Robson Report: Hillsborough guilt and shame and glimmers of human compassion