At high levels of the world of journalism, it used to be commonplace to find people who had started off as bright young reporters on their local newspapers before falling for the lure of Fleet Street, TV or radio and moving away in pursuit of whatever dreams they had.

But not every bright hack and hackette chose that route to professional satisfaction. For many more than made it elsewhere, there was no driving ambition to get away. They were happy and fulfilled working on their own local papers, or maybe local radio stations, and actually enjoyed life in or near the places there they grew up.

Ian Laws, who died suddenly yesterday at the appallingly young age of 41, seemed to fit that second category to perfection.

I knew him only slightly, having first met him at an away game, Norwich City, some years ago, when we had a pre-match pint or two together (he may have been bearing my ticket from a mutual friend); I found him instantly likeable and good company and we met again at a few other games.

Ian was then a news reporter on the Sunderland Echo. He later moved to the sports desk, which for a Sunderland supporter must have felt like a decent consolation prize for not being able to turn out at Roker Park or the Sol in our club’s red and white stripes.

Read Martin Emmerson’s tribute by clicking anywhere on this sentence …

I made a similar point when writing about Ian last November and as “MJR” puts it, in one of a stream of moving message at the Ready to Go message board today, he “had the best job in the world, being paid to watch and write about Sunderland AFC…”

In fact, Ian moved on, within the paper, to take charge of its website editorial content last summer. A promotion, I imagine, but also a wrench, though one that enabled him to spend more time with his young family (married to Kelly with three young children, Lauren, James and Millie) and to return to being a supporter.

He had covered SAFC with diligence, skill and – so far as is possible in the circumstances – objectivity. I have said before that those who sneer at how local newspapers cover their clubs’ affairs betray spectacular ignorance of the power those clubs hold to limit access and generally make life difficult, often on petty grounds.

SAFC is no worse than other clubs in this respect, but has had its moments of directing childlike tantrums at this or that writer or outlet. As a regular reader of the Echo, I would say its football writers achieve a sensible balance in their approach to this perilous tightrope act in which the commitment to freedom of thought and action can never be absolute. And the comments below from Margaret Byrne, SAFC chief executive, and Niall Quinn show that Ian succeeded in earning the respect and affection of those he dealt with at the SoL.

But none of this matters any longer in Ian’s case. He was a good journalist, loved his football club and took pride in his origins. But he was also a family man and that, today, is the focus of my own thoughts as I offer Salut! Sunderland‘s warmest and truest condolences to his wife and children. RIP Ian.

And here are some of the other tributes to Ian, again from Ready to Go:

Mark Douglas, of The Journal (tweeted to Dangly Ham):

Shared a car with him to a few away games. Driest wit in the press pack – and top writer with huge SAFC knowledge

IIRC, he was one of the few who refused to be ‘in the pocket’ of the club during the slightly darker times. SAFC through and through, and it showed in his pieces. As someone else has said, a massive hole in the NE sports scene … 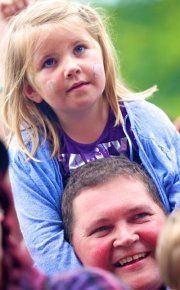 Superb bloke. Worked with him at my very first paper when I was mere YTS and he was a young news reporter. Played footy with him and shared the odd car journey to and from games. A top man who always had a smile on his face and great sense of humour. Thoughts with his family. You will be missed Lawsy a true SAFC man

Read his articles in the (Shields) Gazette everyday growing up, especially through some dark days when the mags were well ahead of us.

Worked with Ian for 6 years, indeed a top, top bloke.

This is truly sad news. Excellent writer and the couple of times I met him he was a real gent,my thoughts are with his friends and family.

I knew him and his brother from School, footy, scouts and all that malarkey. Pretty shocked to hear he died so young. Top lad in my experience remember him being in rock band at school anarl. I remember Lawsy’s stint as a rock vocalist in ‘Too Much Blood’ when they opened with One Vision – he took a bit of stick off the crowd like. First time I’ve smiled in the last ten minutes when I remembered that …

Very Good Journalist seemed to echo the thoughts of the fans very well, I always made a point of reading his reports as they always reflected what I thought about our club.
R.I.P. Mate god bless keep the red flag flying high up there. My prayers and thoughts are with your family.

Always enjoyed reading his work about SAFC, and came across as a genuine fella and supporter

And, from the official club site:

Everyone at the club is shocked and saddened to learn of Ian’s untimely passing. He was a dedicated and talented writer whose passion for the club, his profession and his readers shone through in his work. On behalf of the directors, players and staff of Sunderland AFC, I would like to extend my sincere condolences to Ian’s family and friends.

They can be justly proud of his contribution and achievements during his tragically short life.

Ian was a dedicated family man and will always be remembered as a friend of this club. He was a fantastic journalist and a fantastic person – Ian’s sense of humour and warm, unassuming nature meant he was liked by everyone he came into contact with.

His passion for Sunderland – its club, places and people – was remarkable and he will be greatly missed. My thoughts are with Ian’s young family at this terrible time.

Ian was a great journalist – principled and with an in-depth knowledge and passion for football and especially of course Sunderland and yet he retained a natural warmth and ability to get along with everyone he met. He had a wonderful sense of humour and truly came alive when talking about his children. I had the pleasure of working with him for nine years and he will be sadly missed personally by me and by everyone at the football club.

It goes on. I found one or two more moving tributes on Twitter:

NE football journalism in mourning for one of our own. Terrible news about Sunderland Echo man and top bloke.

There, with the fine words of Crabbers, I will leave it. Please add your own tributes if you knew Ian or his work. RIP.

Next Post
Soapbox: will Balotelli, Davies and/or Muslimovic climb through our transfer window?