Dave Chamberlain*, a man after Monsieur Salut’s heart when it comes to music, readily answered the call when we launched the search for an Ipswich Town supporter ahead of the game at Portman Road, which those ever considerate folk at the EFL have deemed appropriate for a midweek evening kickoff. Dave supports the Tractor Boys from afar, having lived for some years in South Wales, where he has also developed a soft spot for Merthyr Town as well as regularly watching rugby, and mentions a Merthyr link to SAFC. He sees no immediate end to Simon Gayson’s winless run but believes he is, like Mick McCarthy, a good Championship manager and deserves time (and not the chuck-him-into-Durham-jail kind) …

Salut! Sunderland: Seventh top versus relegation contenders. What has gone right – for you – and should we be asking for Mick McCarthy back?

Dave Chamberlain: Mick McCarthy has an ability to unearth bargains and build a squad on a shoestring. He’s proved himself as a consistently good manager at championship level and I was frankly surprised when Wolves let him go. I did think he would go back to the Stadium Of Light at one point, but am glad that he didn’t.

It looks like another Sunderland old boy, Martyn Waghorn, who promised so much as a youth player but never made it at our place, has been sharp for Ipswich after  good stint at Rangers. Does he seem a decent Championship striker now?

On early form yes, His time at Rangers has allowed him to develop as a player and if he can reproduce his Ibrox goal scoring form at Portman Road then he will be a valuable addition to the squad 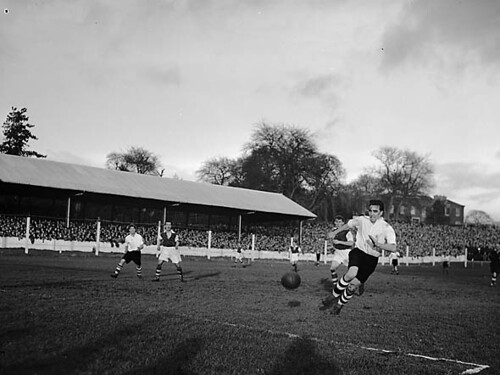 Discovered at Flickr, Dave’s two teams -Mwrthyr and Ipswich – in action in 1951

Other links between our clubs include Titus Bramble, Carlos Edwards, Grant Leadbitter and Connor Wickham, not to mention McCarthy and Keano. Any pressing thoughts on any of them?

Mick McCarthy, a good manager and the perfect antidote to Roy Keane, someone who promised so much but ultimately failed to deliver. I must admit to being surprised by Connor Wickham’s move to Wearside, personally I thought the step up to the Premier League came a couple of years too early and he would have benefited from more time developing at Championship level.

Relegation, administration, playoff disappointments, flirting with drop to League One; has life outside the Premier League been miserable or do you not really miss it?

To be honest I don’t really miss the Premier League. I would rather be competitive at Championship level than perennial whipping boys at the top table.

Is McCarthy and Marcus Evans a manager/owner pairing that inspires confidence for the future?

I’m not sure that they are a combination that will get us back to the Premier League but they seem to have brought stability to the club. Under them the club is sustainable and we should be challenging for the playoffs. My only concern is that If we did get promoted the lack of resources would mean that we would be struggling at Premier League level

Who apart from Waghorn will threaten our defence?

David McGoldrick will always be a threat. Andre Dozzell also seems to be developing as an attacking midfielder in the image of his father

Best players you can remember seeing – or wish you’d seen – in Ipswich colours?

I suppose I’m lucky, having grown up through our glory years in the 1970s & early 1980s so Frans Thijssen, Arnold Muhren, John Wark, Mick Mills and Paul Mariner, Dalian Atkinson tearing down the wing with the ball at his feet was a sight to behold.

Stuart McCall. Could never understand why he was a first team fixture & there was always a sense of trepidation when he was defending inside our penalty box.

Best and worst times of it as a supporter?

Best times, winning the FA Cup & the EUFA Cup, any time we beat the Budgies. The worst. Relegation, Paul Jewell, even if he did get us to a League Cup Semi Final against Arsenal, losing to that lot at the other end of the A140

Thoughts on Sunderland – the club, the fans, the city and region, Simon Grayson?

I must admit to a slight bias here as my grandfather was a South Shields native and lifelong Black Cats fan. I must admit to never having visited Sunderland but, in my dealings with Mackems in the past I have noticed an openness and a strong sense of community that is very similar to where I live in the South Wales valleys.

In Simon Grayson you have a good young manager, he did well in getting Preston North End promoted last season, hopefully Ellis Short will give him the time and resources to his job properly

Hand on heart, where will our sides finish the season?

I would like to think both The Black Cats and The Tractor Boys will be there or thereabouts for the playoffs come the business end of the season.

Do you feel diving and other forms of cheating are as much an issue in the Championship. What, if anything, can be done to eradicate it from the game?

Definitely and with each passing season it’s getting ever more ingrained. What will help is consistency in refereeing. Perhaps the introduction of citing panels where a player can be retrospectively punished may help as well.

Any view of refereeing standards at this level?

Not perfect but has got better in recent years. Come and experience refereeing at Southern/Northern league level & you’ll appreciate what you have.

And apart from making it illegal to have Sunderland travel to Ipswich on a Tuesday night what should the authorities doing to improve the lot of ordinary supporters.

With you 100 per cent on the travelling, not just for midweek fixtures, why not bring back local derbies over the Christmas holiday? Pricing needs to be looked at, particularly for away fans. I know several clubs are doing something about this, including our own £25 reciprocal cap in arrangement with other championship clubs. Finally, bring back safe standing. The atmosphere is a major part of the match day experience and these days I’ve been to noisier libraries than some of the games I’ve been to

Will you be the game? What will be the score?

Unfortunately not, living on the other side of the country, I’m more likely to go to an Ipswich away game than I am to go to Portman Road these days. My score prediction 2-1 to the Tractor Boys.

* Dave Chamberlain on himself: Who am I? Well, although I’m not Ipswich born, I’m definitely Ipswich bred. My first visit to Portman Road was in December 1978, Leeds were the visitors and we lost 3-2. That didn’t put me off & I have followed my hometown club ever since.I have lived in South Wales for about 20 years & am now located in the Valleys, where I live with my partner and our two children. In my spare time I present Acoustic Routes, a Folk and Acoustic Radio show on DapperFM, a community radio station based in Aberdare. I’ve also recently starting putting on the occasional live music event as well.

When I  moved to Wales I needed somewhere to get my football fix, I tried going to both the Liberty Stadium and Ninian Park but couldn’t bring myself to support either Cardiff or Swansea city. Then, one Saturday afternoon, while the kids were off on a trip with scouts, I had to take my partner to an event in Merthyr Tydfil, having dropped her off I found myself at a loose end and it just so happened that Merthyr Town were at home that day, so, off to Penydarren Park I went. Needless to say I was hooked and I am now equally proud to describe myself as a Merthyr Town fan as I am an Ipswich Town fan. The current Merthyr player/manager is former Ipswich, West Ham & Yeovil midfielder Gavin Williams. There is also a Black Cats link to Merthyr as well. Although he never played for the Martyrs, your goalkeeping coach Adrian Tucker was born in the town. Besides football, I also enjoy watching cricket, both codes of Rugby, Ice Hockey and Speedway, all of which can be found just down the road in Cardiff. Ironically it took me moving to a Rugby Union hotbed to start watching Rugby League on a regular basis.

Next Post
Sixer Says: two cheers for Watmore as Under 23s lose to West Ham